The International Rescue Committee (IRC) has released its 2022 Emergency Watchlist, a global list of humanitarian crises that are expected to deteriorate the most over the coming year.

Even though these twenty countries are home to only 10% of the world’s population, they account for a staggering 89% of those in need of humanitarian aid worldwide. Through the IRC’s work, we have also seen small moments of hope in these countries: from the birth of a new baby to a child finding solace in music to a refugee giving back to his community.

Below, hear from five people on their struggles and their wishes for the future as they face some of the world’s most deteriorating crises.

Afghanistan: Fear of a looming famine

"My message is to please help our doctors with medicine," says Mosina.
Photo: Kellie Ryan/IRC

Afghanistan is number one on this year’s Watchlist. The shift in power to Taliban control in August 2021 after decades of conflict led international donors to immediately suspend most non-humanitarian funding and freeze billions of dollars’ worth of assets.

Without this funding, most health clinics are at risk of closing and the economy has spiraled downward—putting the cost of food and medicine out of reach for many. IRC teams are seeing children arrive at health clinics severely malnourished and on the brink of starvation. Nine million people could face famine.

Mosina*, 31, recently celebrated the birth of a daughter after the loss of another child during delivery. Concerned about the future and grateful for the care she and her newborn received, she hopes Afghanistan’s health workers will get the support they need:

When I gave birth to my baby, Seema, at the IRC clinic, it was a good and normal delivery. I was worried about this birth but could not afford a private hospital. When I came here, they treated my pain and soon I had a baby in my arms.

Our economic condition isn't good, but Allah gave Seema to us. We love her, and we are happy.

We were poor in the previous government and poor now. My husband is a simple worker. He works one day and then for twenty days there is no work at all.

It is peaceful now, but our concern is that we're facing a famine. We have peace and a good life, but not enough food and money. We cook just one meal a day.

Most people in [our community] are poor. My message is to please help our doctors with medicine. 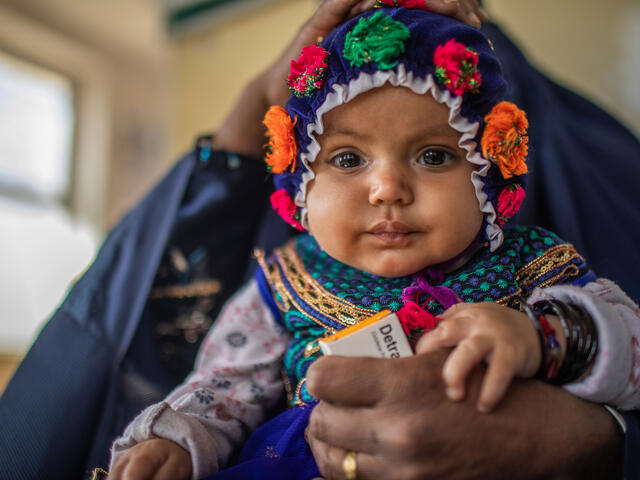 Mosina brings her five-month-old daughter to a check up at an IRC-supported clinic.
Photo: Kellie Ryan/IRC

Syria: Years away from home

Syria is number nine on this year’s Watchlist. Syrians are enduring the worst economic crisis since the country’s decade-old war began, with record levels of food insecurity and rapid inflation. 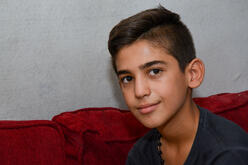 Yasser was just 7 years old when he became one of the 6.8 million people internally displaced in Syria.
Photo: Nada Bader/IRC

At the same time, water shortages in northern Syria are creating drought-like conditions for millions and jeopardizing already compromised health and water systems.

Yasser* was just 7 years old when the conflict forced his family to flee their home in Ras el Ein, joining the 6.8 million people internally displaced in the country. Life in the camp is difficult. Families lack proper shelter to shield them from Syria’s cold and wet winters. During the summers, they are exposed to heat intensified by climate change. Basic necessities are hard to come by.

Yasser has attended an IRC program to help him deal with the stress of living in the camp, and has embraced music and art as outlets to express himself. But his ultimate wish is to be able to safely return to his home: 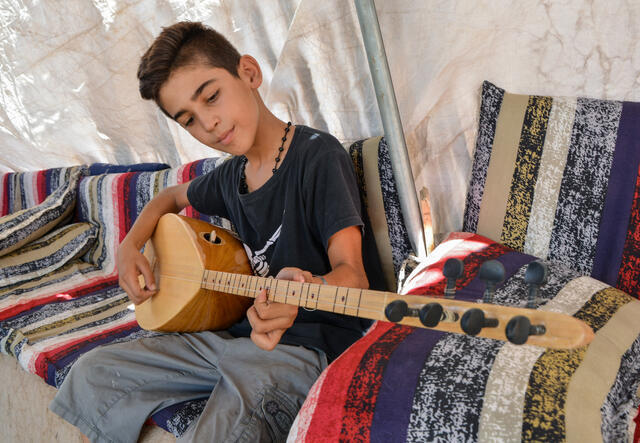 "Whenever I am playing music, I feel like I’m over the moon," says Yasser.
Photo: Nada Bader/IRC

My biggest fear is that we won’t ever be able to go back to Ras el Ein. Every single person in the world loves their hometown. When we had to flee, I cried; I didn’t want to leave. I miss everything about it.

We often don’t have electricity or water. When I first arrived [at the camp], I wasn’t able to go to any kind of school. I was such a sad person—it wasn’t a nice feeling.

When we left Ras el Ein, I stopped playing [the buzuq, a stringed instrument]. But two months ago, an organization bought a new buzuq for me and now I’m playing it again. I’m so thankful to them.

I would like to see Syrian children able to live like all the other children in the world. I’d like to return to my town and live in our house comfortably again and go back to school. I miss my friends and my neighborhood and everything about home. 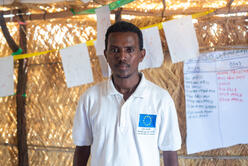 Hadera is a Tigrayan refugee who was forced to flee to Sudan and a member of the IRC’s child protection team.
Photo: Khalid Alarabi/IRC

Climate change and continued conflict in Tigray, and now the neighboring Amhara and Afar regions, have pushed Ethiopia to number two on this year’s Watchlist. Two million people have been displaced and millions more need humanitarian assistance.

The United States estimates that 900,000 people face famine conditions in Tigray, although these figures cannot be verified due to restrictions on humanitarian access. There’s no doubt, however, that Ethiopia is exposed to the impact of climate change, which will drive up needs for millions across the country.

Hadera** is a Tigrayan refugee who was forced to flee to Sudan. A member of the IRC’s child protection team in Tunaydbah refugee camp, he helps children learn to cope with crisis at an IRC-run safe space funded by the European Union. While he is grateful to serve his community, he wishes for a better life for Ethiopian children:

I was fortunate to arrive and be safe. Many people lost their lives.

I have been here for four months. Most of the time what we’re doing is helping the children to forget the bad memories, what they have seen during the war. They have a lot of bad stories; for instance, I met one girl who had seen a dead body in the jungle and who had broken her leg on the journey.

We play games with the children and also prepare lessons and do mindfulness activities. The children are happy here but we need more space so we can see more of them.

Children are the promise of tomorrow. And they need more than adults do. They face a lack of adequate nutrition, medicine, hygiene, and entertainment—so I believe I have to contribute to helping them.

It’s sorrowful to meet children who have seen so many bad things in their life. But I’m happy I can support my people. 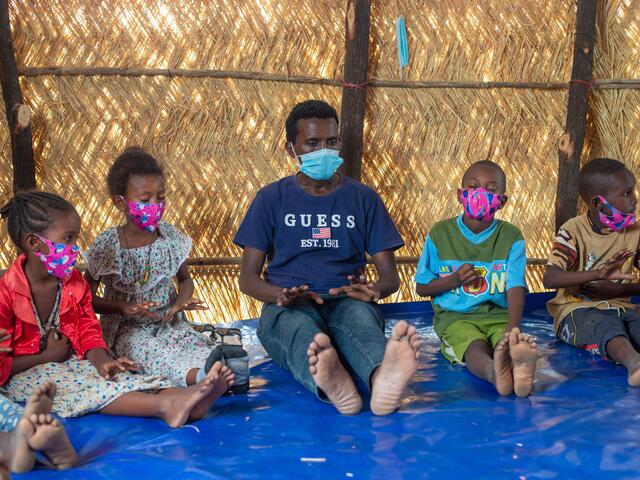 "We play games with the children and also prepare lessons and do mindfulness activities," says Hadera. "The children are happy here but we need more space so we can see more of them."
Photo: Khalid Alarabi/IRC

Fifth on this year’s Watchlist, South Sudan marked a decade of independence in 2021, but the country has been wracked by violence and extreme flooding throughout that entire period. 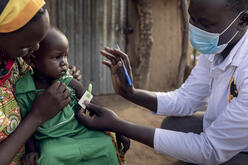 While conflict remains far lower than the peak in 2013-2014, the World Food Program warns that food insecurity is at its worst levels since independence, underscoring the combined impact of natural shocks, COVID-19 and long-term damage to South Sudan’s economy.

Anan Abang is one of the many parents in South Sudan who has had a child suffer from malnutrition: her two-year-old son, Peter. Her family was displaced from their farm during heavy rains a year ago, and she has had to store the crops she was able to harvest in a temporary shed. While grateful for the support she received for her son at an IRC-run clinic, she continues to find it difficult to make ends meet: 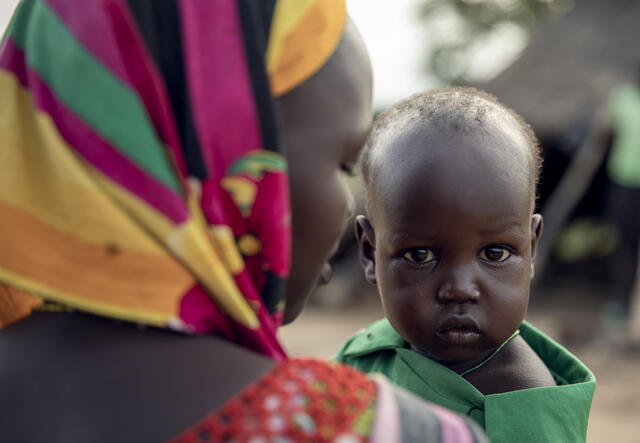 Anan Abang is one of the many parents in South Sudan who has had a child suffer from malnutrition. She brought her son, Peter, in for treatment at an IRC-run clinic.
Photo: Adrienne Surprenant/IRC

I like to be identified as a mother; it makes me happy to be called that.

My child, Peter, was very sick in August of last year. His whole body was weak, and he could not sit up at all.

Our house collapsed a year ago…it is really tough.  Even if I go to the market to purchase meat, paying for it is tough. For people like us, who have nothing, you can’t buy things like that and eat them once again like we used to.

Peter is now feeling much better, and I am very happy for the support. He will now go to school to learn. He will be able to help me in the future, when he gets a job. That makes me happy. 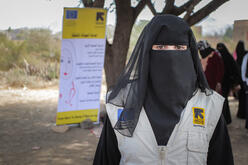 Yemen is number three on this year’s Watchlist. The country dropped from its previous position in the number one slot not because things have improved, but because other crises have worsened.

Economic collapse and the destruction of health, education and other critical systems due to years of conflict continue to push Yemenis deeper into need. Since 2015, 229 schools and 148 hospitals have been damaged during fighting or used for military purposes. Over 16 million people are facing crisis or worse levels of food insecurity.

Elham Ali Muthana’a, 25, is an IRC community health volunteer who works in a camp for displaced Yemenis, where she screens children for malnutrition and raises awareness of  COVID-19 prevention.

The IRC spoke with Elham In November 2020 about her work on the frontlines of Yemen’s growing economic and hunger crisis. Since then, the need she describes has only continued to grow:

I go door to door educating people about COVID-19. People in the camp are living in tents; they do not have houses to shelter in. They suffer from cold weather at night.  They don't have an income, especially during COVID-19, and for sure they are hungry. In addition, the cold and lack of food means they are exposed to illness.

One day while walking I found a woman who was not able to eat. She was collecting wood but she had nothing to cook with. She had no money at all.

I bought the woman a pan, so at least she could cook. I had nothing else I could give her, personally.

It is difficult to afford anything. Patients can’t buy medicine; my own brother-in-law has cancer and can’t afford his medicine.

We wish to live in peace, with no wars. 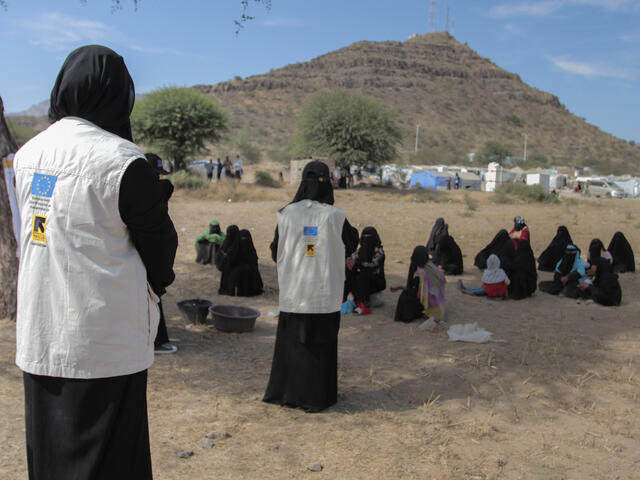 "People in the camp are living in tents," says Elham. "They do not have houses to shelter in. They suffer from cold weather at night."
Photo: Saleh Ba Hayan/IRC

*Names changed to protect the privacy of the story subjects

**Last name omitted to protect the privacy of the story subject