What do people in Beirut need after the explosion?

In addition to the catastrophic events of recent days, the Lebanese people have been faced with an economic collapse and increasing scarcity of food, as the country confronts a global pandemic.

When an explosion of earthquake magnitude shook Beirut on August 4, the Lebanese economy was already in freefall, COVID-19 had overwhelmed hospitals, and the country was coping with a protracted humanitarian crisis brought on by the war in Syria.

This ‘triple crisis’ has now merged into a ‘quadruple crisis’, which will further deepen the suffering of people who have already been pushed to the brink. Here's what people in Beirut need right now:

Homes have been left without windows, doors, water or electricity as a result of the blast, and some have suffered substantial structural damage. More than 300,000 people have been displaced, one-third of them children. Many traumatized residents—particularly the elderly—are unwilling to leave their damaged houses and are sleeping inside or just outside on the street. 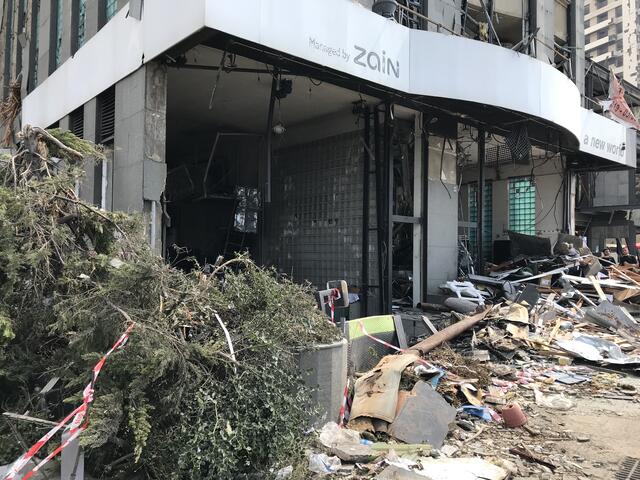 Some 300,000 people were displaced when the explosion damaged or destroyed their homes.
Photo: Elias El Beam/IRC

Children need help to cope with trauma and loss

Although the number is still unclear, it is possible that many children were separated from their families in the aftermath of the explosion. Children will also have witnessed the destruction of their homes, the death of family members, and the hospitalization of loved ones.

Hundreds of children will be recovering from injuries themselves—and even those without physical wounds will be suffering from the psychological effects of what they have been through over the past week. They will need substantial emotional and psychological support to help them come to terms with the disaster, and to help them cope with the suffering they will continue to see around them over the coming months.

An estimated 150,000 women and girls have been displaced as a result of the explosion. Thousands are among those still living in their damaged houses, while others have relocated to temporary accommodation or are sharing shelters with many other families. In the coming weeks, these insecure living conditions and the disruption of social services will make women and girls even more vulnerable to sexual violence, exploitation and abuse, which tend to spike during times of crisis. 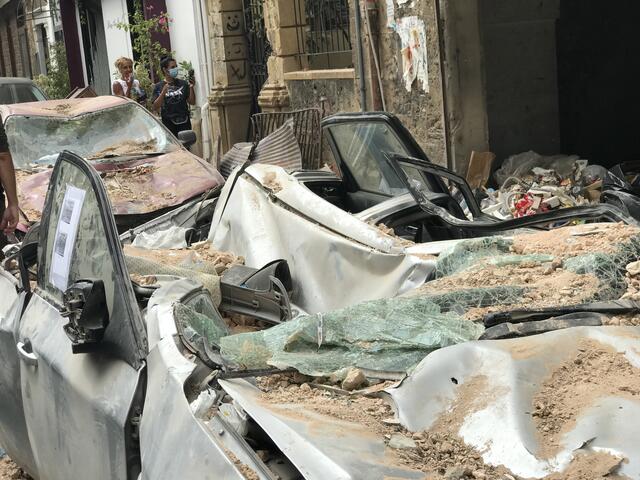 When the blast of earthquake magnitude shook Beirut on August 4, Lebanon was already in crisis.
Photo: Elias El Beam/IRC

"In an emergency situation like this, existing protection mechanisms that are usually in place to keep people safe often break down—and it is for this reason that women and girls are among those worst affected when disaster strikes," says IRC Lebanon country director Matias Meier. Gender-based violence was already on the rise with COVID-19—all while women’s and girls’ capacity to report and seek help diminished, due to the escalation of the pandemic and restrictions on freedom of movement.

Additionally, a recent IRC survey revealed that the second most common form of gender-based violence in Lebanon was the forced and early marriage of girls. This risk may now increase given the most recent crisis will put increased pressure on many household incomes.

An already overwhelmed health system is now being stretched to breaking point as medical facilities in Beirut continue to treat thousands of patients for severe burns and traumatic injuries. Three hospitals in the city were destroyed by the blast. Two more suffered severe damage, but at least one has managed to continue to function by setting up a field hospital in its parking lot. Many facilities report an urgent need for more medical equipment to treat all those in need of care.

Before the explosion, hospitals were already near capacity, coping with a spike in COVID-19 cases. Now the situation is deteriorating even more rapidly, with more than 300 new coronavirus cases being confirmed each day. It has become harder for people to protect themselves from the virus while they are living in damaged homes without running water, or sharing shelter accommodations with other families. 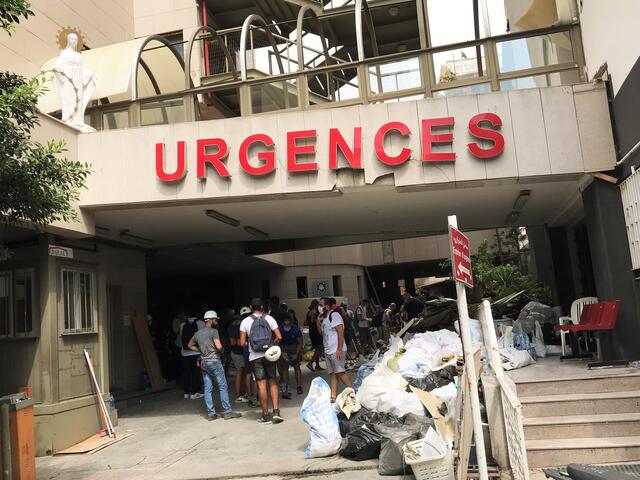 Before the explosion, hospitals in Beirut were already near capacity, coping with a spike in COVID-19 cases.
Photo: Elias El Beam/IRC

Across Beirut, and the country as a whole, everyone was already suffering—Lebanese, migrant workers and refugees alike. People were struggling to pay their rent and to buy food to feed their families.

The explosion destroyed all the wheat silos at Beirut’s port, raising fears that food insecurity will become an even greater issue for people in Lebanon. The Lebanese pound lost 80 percent of its value over the past year. This, coupled with the country’s economic collapse and the COVID-19 pandemic, has made it more and more difficult for families to afford even basic food items such as bread 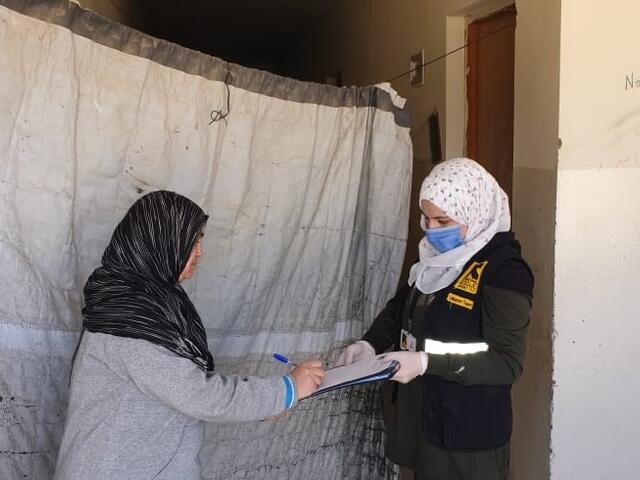 The IRC provides emergency cash relief to vulnerable people in Lebanon, and has launched an emergency response in Beirut.
Photo: IRC

In a recent survey, the International Rescue Committee (IRC) found that 87 percent of households we spoke to said that lack of food was a critical concern for them. This figure jumped to 97 percent for those with a family member who has a disability. Most households have been completely cut off from their sources of income.

According to the World Bank, a staggering 45 percent of the Lebanese population (1.7 million people) is at risk of sinking into poverty over the coming months.

IRC analysis suggests that 30,000 women were already unemployed before the blast, and that countless more have now lost their jobs. It is expected that these compounding crises will leave women even more vulnerable, with many becoming increasingly reliant on negative coping strategies such as skipping meals and incurring debt.

Before the blast, IRC teams were already seeing the results of COVID-19 compounding an already dire economic situation, with increases in the number of children—including girls—working in the street in Lebanon, as well as those engaged in other forms of child labor.

Marginalized groups must not be forgotten

People without strong family or community support networks, such as the elderly or migrant workers who are working as domestics, will be at significant risk of violence, exploitation, and further marginalization.

The IRC is concerned that the needs of the most vulnerable Lebanese, migrant workers and refugees will go unmet as the city struggles to recover from the impact of the blast. 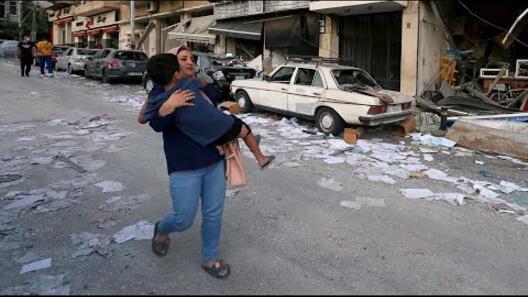 Video
IRC responds to the explosion in Beirut

We have launched an emergency response providing cash to those impacted by the explosion, along with support services that include psychological first aid, to help them recover and begin to rebuild.

Many of our Beirut-based partner organizations were among the first to mobilize as front-line responders to this crisis, and we have been supporting them with emergency cash assistance that can be provided directly to those left most vulnerable by the blast. This currently includes women and children staying in unsafe conditions in shelters; people with disabilities; and children whose family members were hospitalized with injuries.

In the hospitals, we have been providing children with psychological support as they wait for news of their loved ones. When their parents and caregivers are well enough to be discharged, we are providing emergency cash assistance to ensure that they have somewhere safe to stay if their home has been damaged, and that they are able to buy food and other basic necessities. 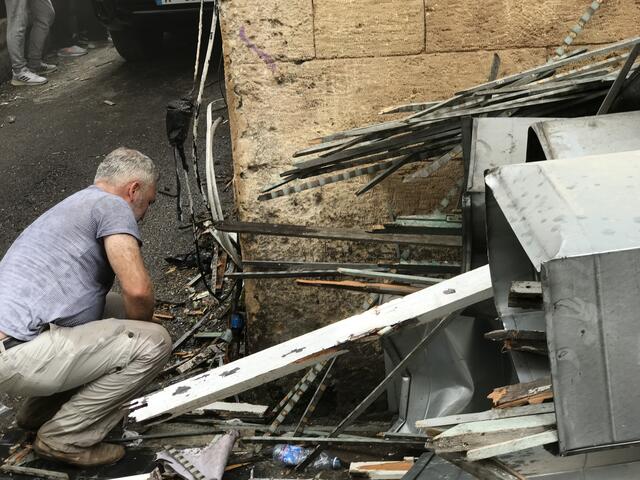 As we ramp up our response, we will begin to provide cash for work so that those impacted by the blast have a temporary source of income and are able to contribute to the rebuilding of damaged houses. We will also provide cash assistance to help entrepreneurs and small businesses repair their facilities and replenish their stocks. Those whose businesses have been destroyed beyond repair will receive up to three months of IRC assistance.

"To assist those who are most vulnerable and most in need, it is crucial that we do not let anyone fall through the cracks," says country director Matias Meier. "We estimate that over half of those displaced by the blast are women and girls.

"We are providing emergency cash assistance and protection support to assist those in critical need, but we urgently need to scale-up our response to ensure that all women and girls are able to receive assistance in the long term. so that everyone who has been impacted can get back on their feet.”

The IRC began working in Lebanon in 2012, supporting both Syrian refugees and vulnerable Lebanese communities. In 2019, we reached over 89,000 people across the country with education, economic recovery and development, and women’s and child protection services.

Donate now. Your gift can help the IRC aid displaced families in Lebanon and support our work in more than 40 countries worldwide.