What do refugees who fled Ukraine face in Poland?

Find out what Ukrainian refugees in Poland are experiencing—and see how the International Rescue Committee helps.

Russia’s invasion of Ukraine has forced over 6 million people to flee the country—the fastest exodus of refugees this century. Most are women and children, who are always at higher risk of exploitation and abuse.

Of those who fled, over 3 million have gone to neighboring Poland. The International Rescue Committee (IRC) is on the ground in the country, working with partners to provide critical information services, legal counseling and psychological support, as well as essential items such as medical supplies, sleeping bags and blankets. We are also responding with partners inside Ukraine.

Learn more about the conditions refugees in Poland are facing, and go inside our response. 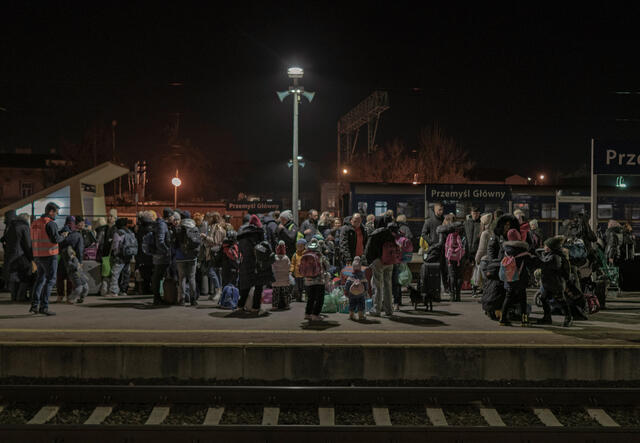 Who is fleeing Ukraine?

The majority of the more than 6 million people who have fled Ukraine are women and children, as men aged 18 to 60 are unable to leave while the country is under martial law. Many families have been separated.

“It was a hard decision to come here because my dad can’t be with us—men are not allowed to go abroad,” said Anastasia*, a 24-year-old who fled to Poland with her mother and younger brother. “But we decided to leave because no one knows what will happen today or tomorrow.” 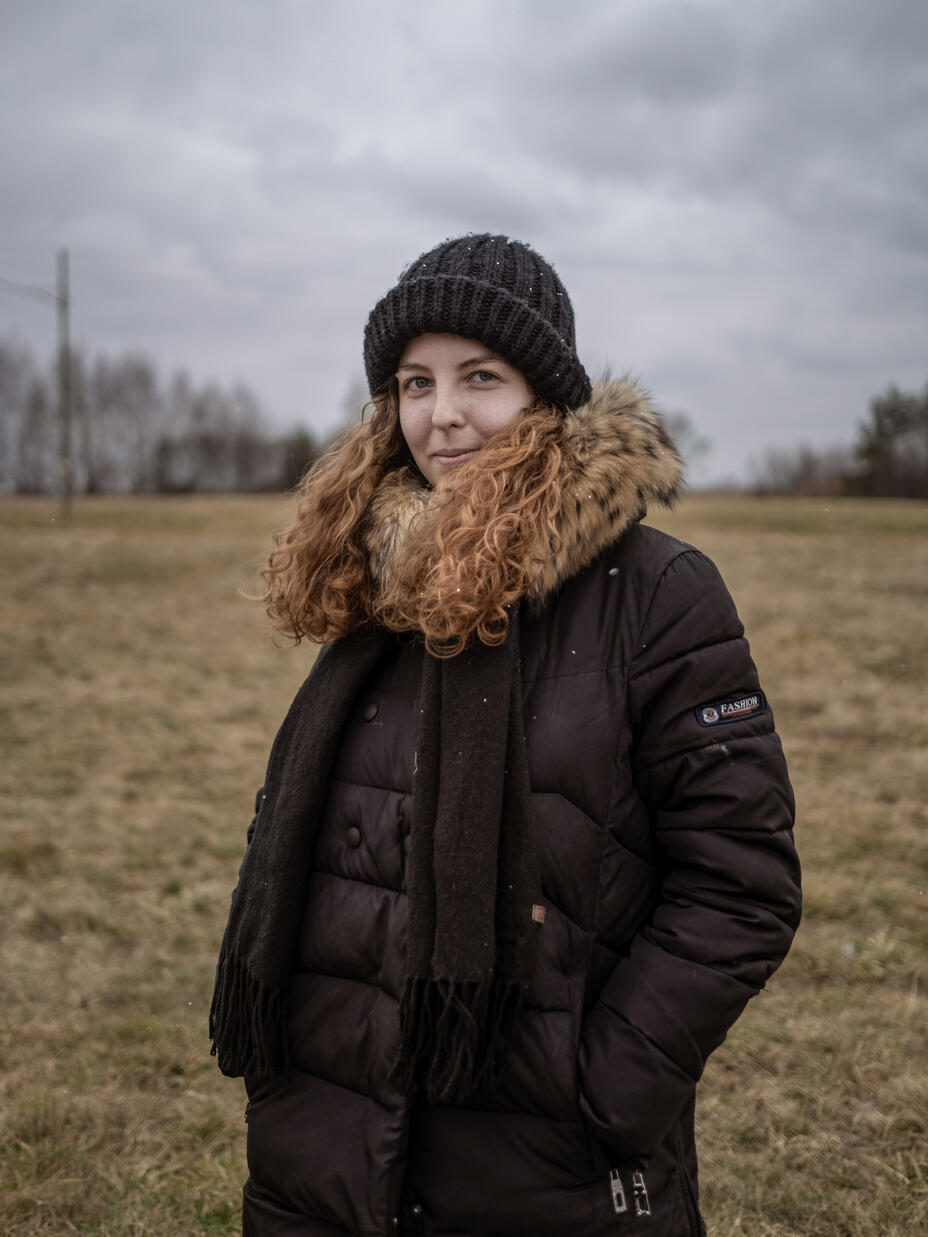 Not everyone fleeing Ukraine is Ukrainian. Students from African countries, Afghan refugees and Belarusian asylum seekers are among the people from countries around the world who have had to flee Ukraine.

When the European Union announced temporary protection to people from Ukraine that enables them to live and work in the EU, the IRC called on the bloc to welcome all people who need to flee the country. This includes asylum seekers and other people with short-term residence status in Ukraine who may be unable to return home.

"It's very clear that compared to recent weeks, they're arriving more traumatized than ever." - @RESCUEorg official Nancy Dent spoke to @wolfblitzer about Ukrainian refugees fleeing to Poland. pic.twitter.com/pS8vBu3Ng0

Seeking asylum is a human right, and it is our moral imperative to give refuge to those fleeing for their lives no matter their race, religion, color or creed.

Where are refugees from Ukraine going? 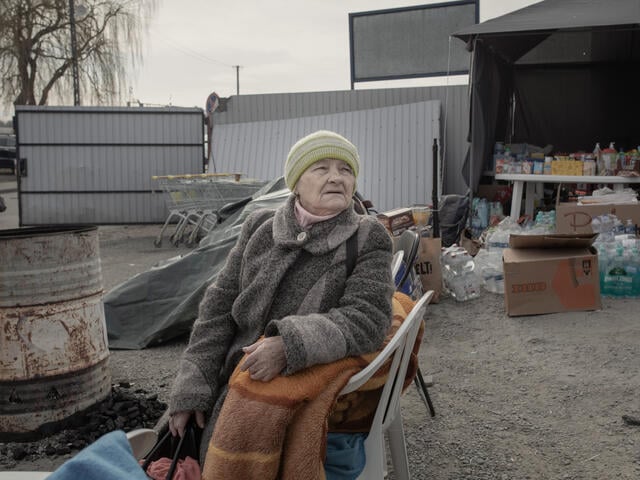 How many Ukrainian refugees are in Poland?

There are over 3 million refugees in Poland right now, although that number is changing every day that the violence continues.

What do Ukrainian refugees face in Poland?

People are arriving across the border exhausted, hungry and cold.

As the conflict goes on, people are arriving with fewer resources. The government of Poland is establishing a number of reception centers throughout the country to receive and assist refugees arriving from Ukraine. Refugees may stay in these centers for a couple of nights before finding shelter elsewhere in the country.

Freezing temperatures in the region are making the journey difficult. The IRC is working with partners to provide blankets and sleeping bags to those who need them as they arrive. We have also provided medical equipment for partners operating along the border with Poland. 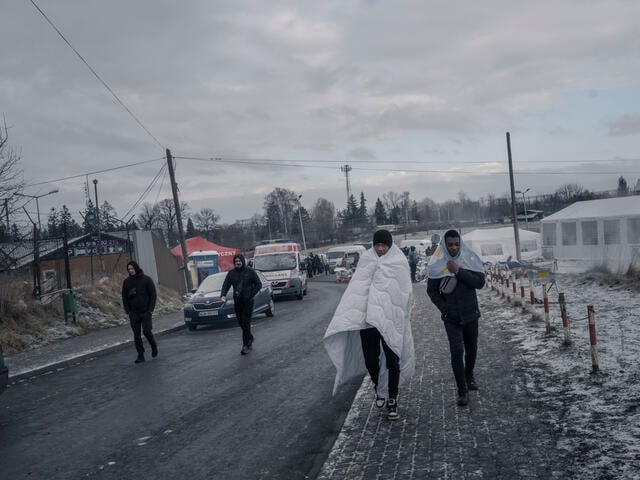 People who fled Ukraine stay for a short time at the Przemysl railway station before continuing their journey into Poland.
Photo: Francesco Pistilli/IRC

Many of those arriving over the border into Poland did not have time to gather identity documentation like passports and birth certificates when they fled. This puts them at risk of exploitation, crime and trafficking.

Women and girls in particular are at risk of sexual violence, gender-based violence, and trafficking. Refugees also do not have regular access to emergency medical services or health care, putting pregnant women and others with medical conditions at risk. 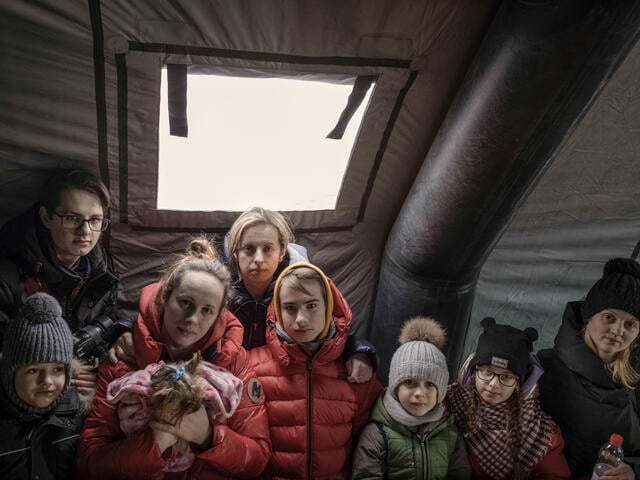 The IRC is supporting a dedicated hotline that offers legal assistance and support to women forced to flee. We are calling for international donors and leaders to prioritize the support and protection services of women and girls. This means listening to Ukrainian women and girls themselves, as well as women’s rights organizations, in all response planning.

What is next for Ukrainian refugees?

Refugees from Ukraine must now support themselves and potentially rebuild their lives in an unfamiliar country. The IRC recently conducted an assessment to learn what refugees most need.

“Ukrainian survey respondents’ most commonly-listed need was by far, ‘a job’,” said IRC Poland team lead Heather Macey. “Whether they are eager to stay in Poland or want to return to Ukraine as soon as possible, Ukrainian refugees want to give back to their Polish hosts.”

Most respondents to the IRC were the elderly or women who were the sole caregivers of their children. Governments must ensure that refugees are able to legally work and support their families as soon as possible.

Refugees will also need translation support so they can access services, reception classes so that children can attend school, language classes and access to all necessary documents they’ll need to move forward with their lives. Single mothers will also need access to benefits and to childcare for those who would like to work.

What are governments doing to support refugees from Ukraine?

In the European Union, Ukrainian refugees have been granted “temporary protection” status. This means that people fleeing the conflict have temporary protection in Europe for up to three years, without having to apply for asylum, and with a broad set of rights including access to work, housing, social assistance and education across the EU.

The IRC is calling on the United Kingdom to ramp up its efforts to welcome refugees from Ukraine, including non-Ukrainian nationals.

In the United States, the Biden Administration announced that the country will use all legal pathways possible to welcome up to 100,000 Ukrainians and others fleeing the conflict. The IRC applauds this move. Given the record numbers of refugees around the globe, we also urge the administration to set robust refugee resettlement goals and ensure the system is nimble enough to rapidly respond to emerging crises. 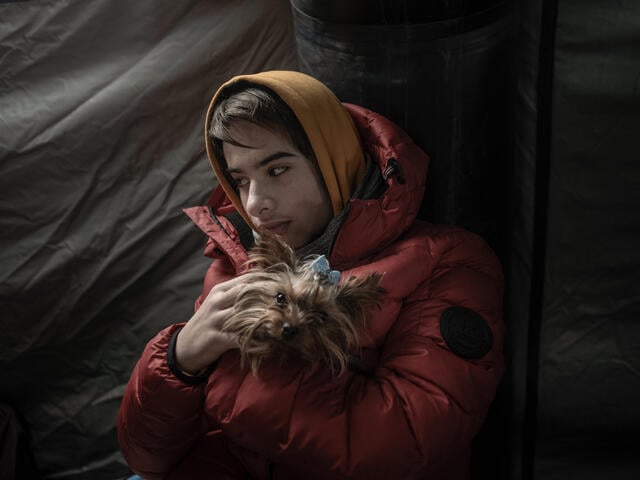 A Ukrainian refugee with his dog stops to rest at the Medyka border crossing point in Poland.
Photo: Francesco Pistilli/IRC

What about refugees from other countries?

Before the crisis in Ukraine, there were already more than 82 million refugees and displaced people around the world—a number that has doubled in the past decade.

There has been a global outpouring of support for people fleeing Ukraine. However, the world must not forget the other crises that together have displaced more people than at any time since World War ll. The IRC is calling for equal empathy to be shown for refugees and displaced people around the world, including those fleeing crises in Afghanistan, Ethiopia, the Democratic Republic of Congo, Yemen and Syria. The world must continue to provide lifesaving funding for these crises, and advocate for the end to conflicts that contribute to them.

How can I help Ukrainian refugees?

The best way to help right now is to donate to organizations like the IRC. The IRC is on the ground in Poland, and working with local partners in both Poland and Ukraine. Working with partners allows us to bolster the crisis response of people who have already been active in the community and are experts on the local context. 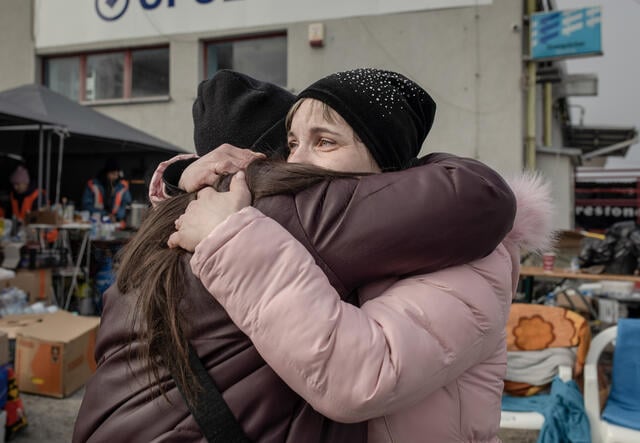 A mother and her daughter meet at the Medyka border crossing point, Poland.
Photo: Francesco Pistilli/IRC

In the initial phase of our response, the IRC is working through partners to provide critical translation services, cultural assistance and psychological support to people who have arrived in Poland from Ukraine. We have also supported a dedicated hotline for legal assistance and support for women, and procured medical equipment for reception centers on the Ukrainian/Polish border.

In Ukraine, we are working with partners to support evacuation efforts for women and children, and to provide critical information services about registration for displaced people, housing, employment, refugee rights and psychosocial care. We are also providing essential support including access to groceries, blankets, warm clothes and stoves.