Are we listening? Acting on our commitments to women and girls affected by the Syrian conflict 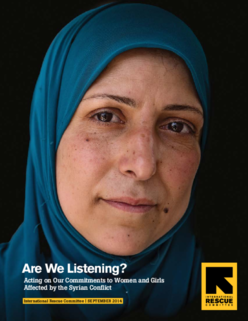 Report: Are we listening? Acting on our commitments to women and girls affected by the Syrian conflict

The International Rescue Committee (IRC) is publishing this report, Are We Listening? Acting on our Commitments to Women and Girls Affected by the Syrian Conflict, to do more than bear witness to the suffering of Syrian women and girls caught in a protracted regional conflict.

This report is about putting into action what the international community has been promising for years: to bring the interests of women and girls—those disproportionally impacted by conflict—from the margins of service provision to the mainstream of humanitarian programming. This report synthesizes information from interactions with thousands of women and girls in the region since the Syrian crisis began.
It amplifies their voices and sheds light on their plight and circumstances. It provides recommendations on ways to make a difference in their lives immediately. Syrian women and girls deserve more than rhetoric; they deserve action.

The issues brought to light in this report were gathered and analyzed based on materials and information from programs in 64 communities within Syria, Iraq, Jordan, Lebanon, and Turkey implemented by more than 260 International Rescue Committee staff and volunteers focused specifically on women’s protection and empowerment activities. In addition, from May 18 to July 1, 2014, the IRC spoke with 198 Syrian women, adolescent girls and men displaced by the conflict. The primary goal of these interviews and focus groups was to understand the challenges facing displaced women and girls in the region, as expressed in their own words, and how they managed and coped with them.

There are three overarching themes that women and girls identified when asked “what are the biggest challenges you are facing.” First is the daily reality of sexual exploitation and harassment. Revealing they feel constantly fearful, women and girls told us about extreme levels of harassment. Second, women shared with us that their homes are not places of refuge and talked about increased incidents of domestic violence. Third, they discussed early and forced marriage in the context of displacement and dwindling resources. It is clear that Syrian women and girls face increased risks and multiple forms of violence as a result of the conflict and displacement. Specifically, adolescent girls are being forced to marry at younger ages, are exposed to more violence in and out of the home and find it increasingly difficult to access services such as health care and education. Parents already on the fence about the importance of education for their adolescent daughters are further deterred by safety risks their daughters face getting to school. It is clear from the conversations with girls that the majority of them want to go to school and see it as a potent remedy for some of their challenges.

In the last fifteen years, international attention to violence against women and girls in conflicts and crisis has increased thanks to a series of important policy debates, humanitarian initiatives and commitments. However, it was not until October 2000 through the passage of Resolution 1325, that the U.N. Security Council formally acknowledged that women are disproportionately affected by armed conflict and are also critical agents of conflict prevention and resolution. The three pillars of Resolution 1325—protection, participation and prevention—laid the groundwork for six related U.N. Security Council resolutions between 2008 and 2013.

"Syrian women are smart. Things have changed and now they are the providers of the household. They are tired, they struggle, but they are a pillar."

There have also been a number of key international gatherings focused on this issue, such as the 2006 International Symposium on Sexual Violence in Conflict and Beyond, which was held to “strengthen our shared commitment and action to prevent and respond to sexual violence in conflict and post- conflict situations.” In 2014, a Global Summit to End Sexual Violence in Conflict was hosted by the United Kingdom as part of their Preventing Sexual Violence Initiative (PSVI). In November 2013, the UK and the Swedish governments organized a Call to Action to Protect Women and Girls in Emergencies to mobilize nongovernmental agencies, U.N. agencies, donors and other stakeholders around this issue, with the follow-up meeting to be hosted by the U.S. government in the fall of 2014.

While these efforts are applauded, the frameworks are meaningful only when they are translated into action. Thus far, this global attention has made too little difference in the day- to-day lives of far too many Syrian woman and girls.

The women and girls you will hear from in this report talked about the nature and regularity of the violence they face simply because they are female. Women and adolescent girls spoke of feeling exhausted by the daily negotiations—for physical and sexual safety when securing food, water, shelter or clothing. Women told us: Some of these things are not new to us; we also dealt with domestic violence and early marriage in Syria. Now, we are safe from gunshots and barrel bombs, but how do we cope with the threats we face in our own homes and the communities we now live in? They shared with us what they do in their daily struggle not only to survive but to do so with their dignity intact. They spoke to us about dangers facing sisters, aunts and mothers displaced inside Syria, where the conflict rages on, and they shared with us how they hold onto strings of hope for the conflict to end.

The time for commentary about what is happening to women and girls inside Syria and those displaced outside has passed. It is imperative that by its actions in the Syria region the international community set new, high standards in accountability to women and girls. The prospects for the next year are for a more intense, fluctuating and dangerous environment for civilians, especially for women and girls. The broadening of the conflict into Iraq, the fragmentation of the opposition, and the cruelty of the fighting conspire to make the world in which Syrian women and girls live smaller, more isolated and more dangerous. The rise of radical extremist groups like ISIS bring women’s safety and security directly under attack, with actions that brutally strip women and girls of gains towards equality. Critically, for women and girls the need is for immediate action not only to make them safe from exploitation and abuse, but safe and empowered to be active participants in their homes, communities and their own lives.

First, women and girls’ voices must be a key force in driving humanitarian action. U.N. agencies, host and donor governments and NGOs must seek out and value the perspectives of women and girls, who account for more than 50% of the refugee population. This value is demonstrated by acting on what women and girls identify as priorities and designing programs to that end.

Second, women and girls must be safe from gender-based violence (GBV) as they seek refuge. The U.N. should commission a regional Real Time Evaluation to assess the application of minimum standards as laid out in the Interagency Guidelines for the Prevention and Response to GBV. This Real Time Evaluation would apply to cross-border work in northern Syria as well as in camp and urban areas in Turkey, Jordan, Lebanon and Iraq.

Third, women and girls should have safe and accessible access to individual registration, in both camp and urban settings. When women are not registered or are only registered under the male head of the household, certain risks are increased and women may experience difficulties in overcoming barriers to the services they require. For example, being registered means women are eligible for services such health care and cash assistance. Their own registration also protects the women from deportation. U.N. High Commissioner for Refugees (UNHCR) has made positive steps in this regard and more needs to be done to make this consistent across the region. For example where a split in a family’s case is necessary, cases need to be quickly assessed by Protection Officers trained in GBV to determine the best interest of those affected.

Fourth, survivors of gender-based violence must receive appropriate care when and where they seek it. This means that U.N. and humanitarian organizations must ensure multiple safe entry points for survivors, where survivors can disclose incidents of violence and receive support or immediate referrals. These entry points should be available where women and girls can go without being questioned or stigmatized—for example, schools, health clinics, women’s centers, distribution sites and via mobile services.

Fifth, programs tailored to the specific risks and needs of adolescent girls should be expanded across the regional response. This requires multidisciplinary programs ensuring safe spaces, age appropriate services and life-skills opportunities for adolescent girls.

Seventh, U.N. and humanitarian organizations must recognize domestic violence as an imminent threat to women and girls’ protection, increase understanding on the causes and consequences of domestic violence, and prioritize funding to design multifaceted interventions to both respond to it and prevent it.

Eighth, women and girls must be able to live free from the sexual abuse and exploitation they spoke about facing every day. This requires UNHCR, host governments and humanitarian organizations to implement, coordinate and monitor mechanisms, and work with local partners on the prevention of sexual exploitation and abuse (PSEA).