The situation for girls in places prone to conflict and crisis can change in an instant. When women and girls lack power in their homes and communities, every shock—whether armed conflict, drought, flood or COVID-19—inevitably affects them more than others.

Millions of girls around the world have grown up amid conflict and crisis. In the Central African Republic, an entire generation has never known stability. Syria’s war has been raging for a decade. Worldwide, COVID-19 has kept nearly 750 million girls out of school or university. The United Nations estimates that the pandemic has led to 13 million more child marriages, disrupting already-challenging efforts to end this harmful practice that has impacted over 650 million women alive today.

Based on the experiences of girls themselves and the expertise of our staff working directly with girls around the world, the International Rescue Committee has identified the following countries as the most challenging places to grow up: 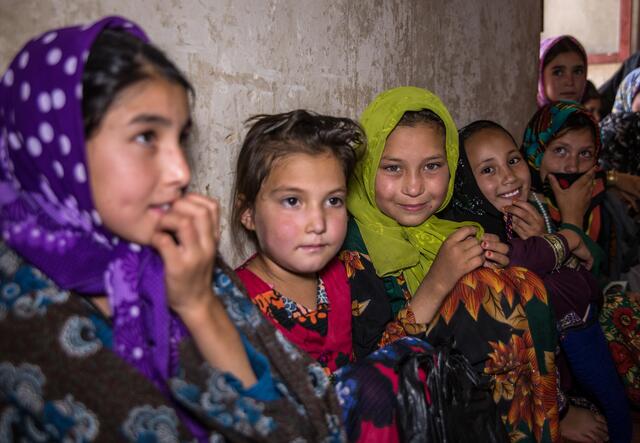 Afghan children at an IRC Safe Healing and Learning Space. Women and girls bear the brunt of violence in Afghanistan.
Photo: IRC

Over 18 million people need humanitarian assistance, including over 3 million women and 8 million children. COVID-19 and a debilitating drought has increased insecurity in the country thrown into further chaos over the last few months. Even before recent events, the United Nations named Afghanistan the deadliest place for children on earth for six consecutive years.

Despite four decades of conflict, Afghanistan saw gains in women and girls’ rights in the last two decades. But the rapidly deteriorating humanitarian situation has left girls uncertain about their future, including if and when they will be able to go back to school. Even before August, it was estimated that half of all children were missing out on education, and girls accounted for 60 percent of the out-of-school population. With the new realities in Afghanistan today, we expect increases in child marriage compounded with diminished access to sexual and reproductive health care and services.

It’s our choice and our right to go to school, to get an education. It's important to give yourself hopes and dreams.

- Girl, 14, from Afghanistan.* She has not been to school since it was shut down due to COVID-19, and has been cooking for her family and doing household chores. 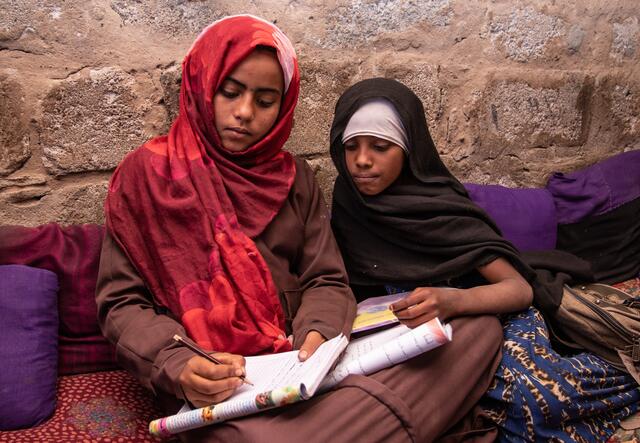 Na'aem, 11 (left), and Aisha, 10, are best friends. Their families fled violence that erupted near their homes and now live in a camp in a remote area of southwestern Yemen.
Photo: Saleh Ba Hayan/IRC

Yemen remains the world’s worst humanitarian crisis, with over 20.7 million people in need of humanitarian assistance and over 4 million internally displaced after six years of conflict. Three-quarters of those displaced are women and children, and an estimated 20 percent of women and girls carry the burden of heading a household. Yemen also ranks as the country that has made the least progress in gender equality, leaving women and girls in a particularly vulnerable situation. According to an IRC gender analysis, that situation has only worsened since the start of the conflict.

For girls, sexual exploitation, child marriage and forced marriage are very real threats. In fact, the rate of forced and early marriage of girls has more than doubled since the conflict started. Nearly two thirds of girls in Yemen are married before the age of 18, and many before they are 15. The continuing economic challenges and lack of educational opportunities during the conflict have also led to a major risk of child recruitment and exploitative forms of labor. ;

One day, I will become a teacher and Aisha will become a doctor. We'll put our salaries together and buy things to distribute in the camp.

- Na'aem, 11, from Yemen. Na'aem and her best friend Aisha, 10, like to study together. They live in a camp for families displaced by the ongoing conflict. 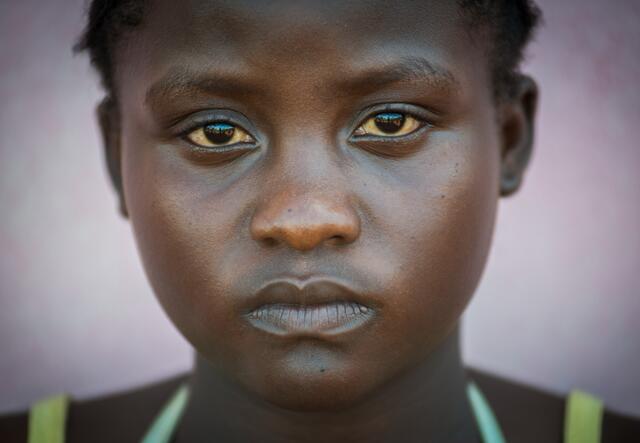 A conflict that has raged since 2012 displaced 15-year-old Melissa's family from their home in Central African Republic. Girls' access to education is limited: Only 25 percent have completed primary school.

Central African Republic has the second highest rate of child marriage in the world (after Niger, below): 68 percent of girls are married before 18. Rape has been documented as a weapon of war in the conflict that has raged since 2012, yet no member of an armed group has been tried for rape during this period.

Access to education is also limited for girls. Only 25 percent have completed primary school, with male literacy double that of female literacy.

- Melissa, 15, from Central African Republic. Nearly a decade of conflict has uprooted families like hers and kept children out of the classroom. 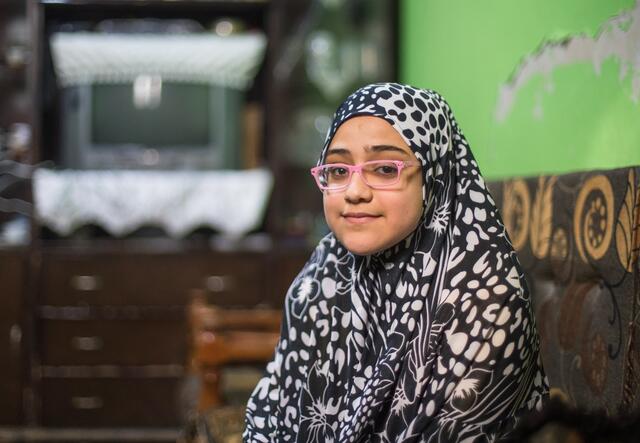 A decade into the war in Syria, 10-year-old Salam has only ever experienced conflict in her life. Her family was displaced from their home by shelling, and she and her sister have missed out on school.
Photo: Abdullah Hammam/IRC

Syrians have lived through a decade of war, and the country remains one of the largest humanitarian crises of the 21st century. The vast majority of Syrians live in poverty, with women and children particularly vulnerable to a range of safety issues including sexual violence, child labor, and trauma.

Child marriage has become more common in Syria since the start of the conflict, like the experience in Yemen. According to one survey in northwest Syria—where more than 4 million people live, including 2.8 million internally displaced people—over half of women and girls said that the fear of sexual exploitation, abuse and kidnapping drove forced early marriage. Meanwhile, 70 percent of girls and women said that child brides were at increased risk of domestic violence.

I dream of living a beautiful and happy life with no shelling, no killing and no war.

- Salam, 10, from Syria. Salam has missed a lot of school because of the conflict. She loves drawing and wants to become an architect. 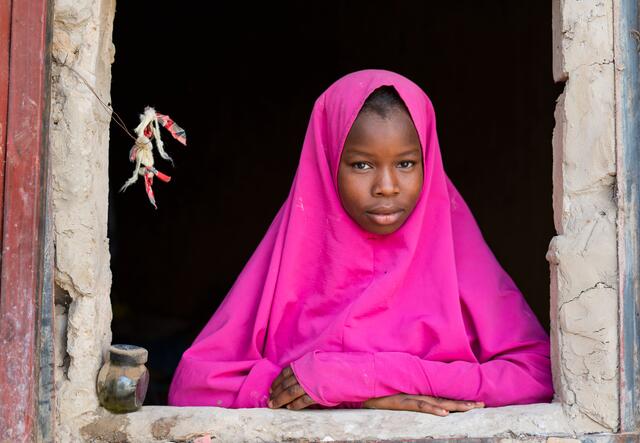 Maryama, 15, lives in a region of Niger that has seen violence escalate over the past two years. She dreams of one day becoming a journalist, so she can expose "all the bad things happening in the world."
Photo: Mamadou Diop/IRC

The Boko Haram insurgency has displaced nearly 2.4 million people in the Lake Chad Basin. Niger has the highest percentage of girls who married before age 18—three out of every four. Roughly 1 in 5 adolescent girls in Niger gives birth before 18.

Education helps to empower girls. It reduces the likelihood they’ll marry as children, equips them to negotiate more equal power within their relationships, and sets them up to seek safe, long-term employment. However, 56 percent of all girls in Niger are out of school.

I want every girl in Niger to be educated so they can become what they want, to become successful and be able to help people.

- Maryama, 15, from Niger. Maryama's favorite subject is math. She wants to study to become an investigative journalist.

How the IRC supports girls to build a brighter future

At the IRC, we’re working to help break down each of the barriers faced by women and girls in crisis hot spots: 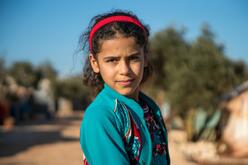 The IRC is helping to focus attention on the challenges girls face and celebrating the resilience of girls like Heba, 10, whose family was uprooted from their home by the war in Syria.
Photo: Khaled Idlbe/IRC

Our Girl Shine program, which supports adolescent girls as they navigate into adulthood, is a good example of the IRC’s approach. We are working with girls to educate them about their rights, help them make healthy choices, protect them from violence, and teach them to be leaders. Through the program, girls build important life skills, including decision-making and developing trust and friendships.

Girl Shine is based on the long experience and knowledge gathered through the IRC’s women’s protection and empowerment efforts and reflects the latest research findings on the experiences of adolescent girls in countries affected by crisis. The IRC is also sharing program materials and what we’ve learned with other organizations so that as many girls as possible worldwide have the support and tools they need to build a brighter future.

*Full names or surnames omitted for the girls' protection