Everything on her shoulders: rapid assessment on gender and violence against women and girls in the Ebola outbreak in Beni, DRC 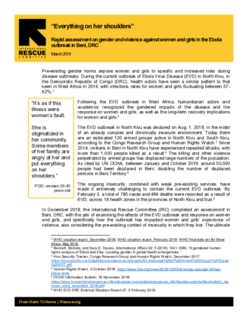 Report: Everything on her shoulders: rapid assessment on gender and violence against women and girls in the Ebola outbreak in Beni, DRC

Pre-existing gender norms expose women and girls to specific and increased risks during disease outbreaks. During the current outbreak of Ebola Virus Disease (EVD) in North Kivu, in the Democratic Republic of Congo (DRC), health actors have seen a similar pattern to that seen in West Africa in 2014, with infections rates for women and girls fluctuating between 57- 62%.

Following the EVD outbreak in West Africa, humanitarian actors and academics recognized the gendered impacts of the disease and the response on women and girls, as well as the long-term recovery implications for women and girls.

The EVD outbreak in North Kivu was declared on Aug. 1, 2018, in the midst of an already complex and chronically insecure environment. Today there are an estimated 120 armed groups active in North Kivu and South Kivu, according to the Congo Research Group and Human Rights Watch. Since 2014, civilians in Beni in North Kivu have experienced repeated attacks, with more than 1,000 people killed as a result. The killing and other violence perpetrated by armed groups has displaced large numbers of the population. As cited by UN OCHA, between January and October 2018, around 50,000 people had been displaced in Beni, doubling the number of displaced persons in Beni Territory.

The ongoing insecurity, combined with weak pre-existing services, have made it extremely challenging to contain the current EVD outbreak. By February 3, a total of 785 cases and 484 deaths were recorded as a result of EVD, across 18 health zones in the provinces of North Kivu and Ituri.

In December 2018, the International Rescue Committee (IRC) completed an assessment in Beni, DRC, with the aim of examining the effects of the EVD outbreak and response on women and girls, and specifically how the outbreak has impacted women and girls’ experience of violence, also considering the pre-existing context of insecurity in which they live. The ultimate goal of this assessment was to inform how humanitarian actors take gender into account in the response and ensure the protection of women and girls. The IRC focused its assessment in four health areas – Butsili, Kanzulinzuli, Kasanga and Mabolio – due to the high number of EVD cases documented there since the beginning of the outbreak.