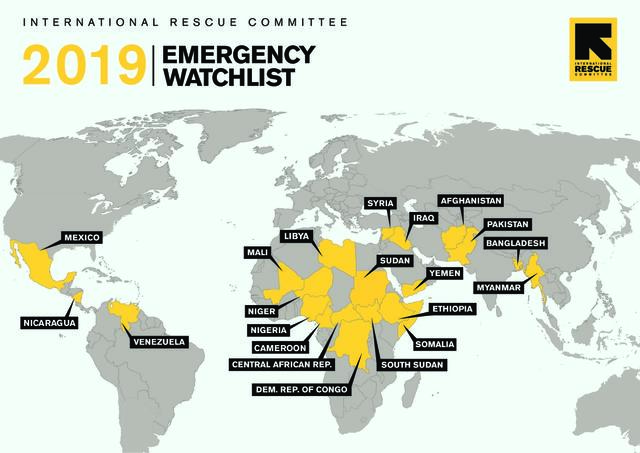 The International Rescue Committee’s Emergency Watchlist 2019 highlights the countries we believe are at greatest risk of experiencing the worst humanitarian crises over the coming year.

The Watchlist provides an analytically robust basis for the IRC to make decisions about where to focus its monitoring, preparedness and other efforts. The IRC already has a presence in some of the countries on the Watchlist; in others it does not. Under the IRC’s 2020 strategy, we intend to establish by the year 2020 a Country Emergency Team in all Watchlist countries where the IRC has a presence. Read more about the IRC’s Emergency Preparedness work on Rescuenet.

The list is divided into a ranked Top Ten, which are the countries we believe – on the basis of a mixture of qualitative and quantitative analysis – are the ones at greatest risk of deterioration leading to the most serious emergencies in 2019. The other countries are ones we are also deeply concerned about, but which we were not able to rank because they may have been included for distinct reasons. For example, Mexico has very high scores for human and natural risk but much lower scores for the vulnerability of its population and the country’s lack of coping capability. In contrast, Niger has lower human and natural risk but its population is significantly more vulnerable and the country scores more highly for lack of coping capability. Both countries merit inclusion, but they cannot confidently be compared and ranked one above the other.

This document contains a brief overview of the current humanitarian situation, and the human and/or natural risks shaping it, in each of the countries on this year’s Watchlist. This is intended to provide background to why a country has been included and (where relevant) its ranking, not to provide an exhaustive assessment of the current situation. It reflects only the available information, which varies widely from country to country.

The inclusion of countries in the Watchlist and their ranking represents our best guess of the level of humanitarian risk in 2019. The situation in all of the countries will be serious, as it will be in others that were not included, and so emergency preparedness work will happen regardless of a country’s ranking. The IRC will continue to track emerging crises globally and will make decisions about where to respond on the basis of the scale and severity of an emergency, as measured by the IRC’s Emergency Classification System, not the Watchlist.