"Sadness, we are full of sadness": Ebola's psychosocial toll on frontline health workers 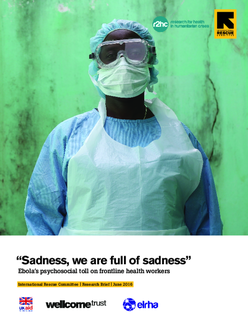 Health care workers were at high risk of infection during the Ebola epidemic. They suffered physically, but also socially and emotionally. For many, these consequences remain unaddressed.

Between 2014 and 2016, primary health facilities across West Africa became flashpoints for the Ebola epidemic. Many more Ebola patients presented initially in these clinics, rather than in the Ebola treatment centers. Initially, the clinics were not prepared for this onslaught, either in terms of training or supplies. As a result, they served to amplify rather than curb transmission. Practitioners working in those facilities, including nurses, aides, laboratory staff, and clerks paid the highest price. They were 21 to 32 times more likely to get infected with Ebola than the general adult population. More than 400 primary health care workers died across Guinea, Liberia, and Sierra Leone.

Most practitioners continued to provide routine health care despite the risk. They experienced the anguish of being firsthand witnesses to relentless, extreme human suffering. In many instances, their reward included stigmatization, discrimination and even physical and verbal assault.

Researchers from the International Rescue Committee, Charité - Universitätsmedizin Berlin, Durham University, Liverpool School of Tropical Medicine, Njala University, Mercy Hospital Research Laboratory, and University of Sierra Leone visited health facilities in Sierra Leone at the height of the outbreak to understand what health workers were experiencing and how they could be supported. The team sought to understand the challenges they faced in using personal protective equipment. They quickly learned that health workers also needed to share their experiences. The team spent one month conducting 54 interviews with 35 health workers.

One main finding was a widespread, acute feeling of stigmatization and isolation among primary health care workers. They were stigmatized and ostracized at work and at home, by friends, family members, fellow health professionals, and the broader community. As a result, health care workers described experiencing a profound sense of loss, loneliness, anxiety, isolation, and sadness, along with the disruption of their lives at work, in communities and at home. The workers we spoke with expressed continued commitment to their work in spite of these challenges.

These findings warrant action. Our research shows that the psychosocial health of health workers, which encompasses their mental, emotional, and social well-being, was gravely disrupted during the outbreak. The voices in this report also teach us important lessons for future outbreaks. Emotional and social support — as well as psychological care — should be integrated into responses, rather than remain afterthoughts. This should be particularly true for diseases such as Ebola that trigger fear and stigma. More generally, addressing the mental health and psychosocial needs of frontline health workers should be part of ongoing efforts to improve health systems and address human resource gaps in the Ebola-affected countries.

During recovery from this epidemic and in future epidemics, we urge responders and donors to:

During the recovery from this epidemic and in future epidemics, we urge researchers to: