Four decades of presidential leadership on refugee protection, until now 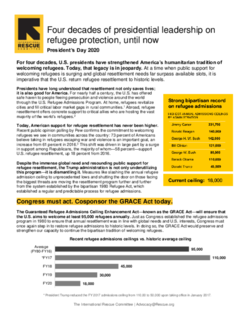 This President’s Day, the IRC is releasing a new report looking back at president’s records on refugee admissions since the creation of the modern-day resettlement program in 1980. This report highlights the bipartisan commitment to welcoming refugees and the critical decisions presidents on both sides of the aisle have made to respond to humanitarian crises and further U.S. interests.

Today, this legacy is in jeopardy. In stark contrast to past administrations, the Trump administration is not only underutilizing this program, it is dismantling it. Despite the immense global need and resounding public support for refugee resettlement, refugee admissions to the U.S. are now at an all-time low:

Congress must step in to restore refugee admissions to historic levels by passing the GRACE Act. Take action today to ask your representatives to support this crucial legislation.