400 years ago, William Shakespeare made a rallying cry for humanity

400 years ago a group of writers collaborated on a historical play – Sir Thomas More. The script included one of the earliest and most impassioned defenses of a compassionate refugee policy, an extract known as ‘the strangers’ case’ speech, widely believed to be written by William Shakespeare.

This World Refugee Day, the International Rescue Committee and Shakespeare’s Globe Theatre have brought that speech to life in our new film.

Who were the ‘strangers’?

The biographical play is set in the early years of the sixteenth century. In London in 1517, a thriving economy attracted artisans and traders from across Europe. Known at the time as ‘strangers’, these foreign workers were welcomed by the crown, and their taxes helped Henry VIII’s finances.

But some of London’s citizens felt threatened by the increased competition. Resentment boiled over on May Day in 1517 when an angry mob rioted through the streets of London, destroying and looting immigrant-owned businesses.

Thomas More courageously faced the mob at St. Martin’s Gate in an ultimately unsuccessful effort to halt their progress. His bravery in trying to stop the riot is a defining moment in the retelling of his life in the play.

Why was the play censored?

At the time Sir Thomas More was written in the 1590s, London was once again seeing an increase in the number of ‘strangers’ coming to the city to seek new lives. This time, they were refugees fleeing religious oppression in the Netherlands and France. England was suffering an economic slump, partly due to a lack of skilled labor, and so Queen Elizabeth I and her government welcomed the newcomers.

Just like in 1517, xenophobic opposition grew and the authorities began to fear that another anti-immigration riot was imminent. The royal censor, Sir Edmund Tilney, was not prepared to see popular unrest on the public stage. ‘Leave out the insurrection wholly and the cause thereof’ he wrote across the play’s manuscript. 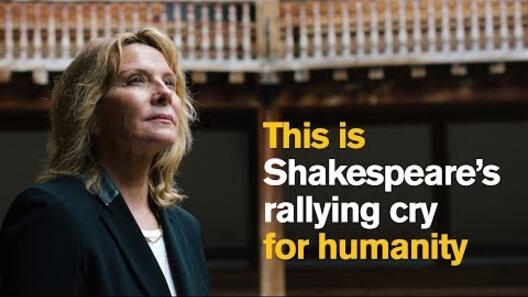 Video
Shakespeare stood on the right side of history

What is Shakespeare’s message?

Shakespeare demands that the rioters put themselves in the immigrants’ position:

Go you to France or Flanders,
To any German province, Spain or Portugal,
Nay, anywhere that not adheres to England,
Why, you must needs be strangers.

Asking the Londoners to imagine their own position as strangers in a foreign land, he paints a dark picture of the suspicion and violence they would find if people behaved like them: ‘Would you be pleased to find a nation of such barbarous temper?’ he asks. ‘What would you think to be used thus?’

Shakespeare concludes with a devastating indictment of the rioters’ unthinking cruelty: ‘This is the strangers’ case. And this your mountainish inhumanity.’

As 68.5 million people are displaced from their homes because of conflict, disaster and oppression, these words are just as relevant today as they ever were. The strangers’ case speech asks you to put yourself in the position of refugees – we hope, like Shakespeare, you’ll choose to stand with them.