Fighting displaces 210,000 in northwest Syria in the depths of winter

Fighting in a so-called de-escalation zone in southern Idlib province, in northwest Syria, has caused 210,000 people to flee their homes in recent weeks. Many are living in dire conditions.

Thousands have crowded into villages in central Idlib, where they shelter in makeshift tents or abandoned structures. Wells provide water but new arrivals have no access to toilets, schools or jobs.

“We couldn’t think properly—the fear affected our brains,” said the mother of two young children who, panicked by air strikes, initially left one of them behind. Fortunately, she found the child unharmed when she returned.

We are extremely concerned for the safety of the 2.6 million people living in Idlib if the frontline continues to advance.

Those fleeing the fighting travel during the day to avoid carjackers. Several people traveling on foot injured themselves slipping on mud, resorting to improvised casts created with egg-soaked rags.

The International Rescue Committee, which helped almost 400,000 people in Idlib in 2016, has renewed efforts to bring critical medical care and financial aid to this new wave of displaced people. An IRC mobile health clinic is providing treatment to families coping with bad colds and diarrhea. The IRC is also distributing emergency cash to thousands without any source of income so they are able to obtain food and pay rent. 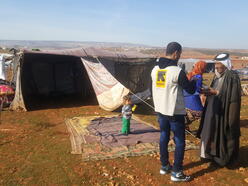 The IRC is on the ground in central Idlib, providing health care and emergency cash relief to Syrian families who have been uprooted by recent fighting.
Photo: IRC

As the world turns its attention to other pressing problems, the IRC remains committed to its work in war-torn Syria. Nearly half of Idlib’s 2.6 million  population is comprised of displaced people, who in turn are but a fraction of the 6.1 million internally displaced through the fractured country. More than 400,000 Syrians are estimated to have died since 2011, and 5.3 million have been turned into refugees.

“We are extremely concerned for the safety of the 2.6 million people living in Idlib if the frontline continues to advance,” said Thomas Garofalo, the IRC’s Middle East director for public affairs. “People have told us that they will have no choice but to uproot themselves once again and head further north. They will be heading to displacement camps that are already far beyond capacity, which means their situation will get even worse, in the dead of a wet, cold winter."