How a Syrian mother became a mentor and voice for refugees

Bothina Matar wasn’t planning to see the Statue of Liberty on her first trip to New York in December 2015. In fact, she wasn’t expecting to see much of the city beyond JFK airport.

Bothina, her husband, Tamam Al Sharaa, their two young children and Tamam’s parents were on their way to make a new home in Texas after escaping the war in Syria. But despite being invited to resettle in the United States and securely vetted by multiple federal agencies, they couldn’t board their connecting flight to Dallas: Gov. Greg Abbott had just announced his state would ban Syrian refugees.

Instead, staff and volunteers from the International Rescue Committee (IRC), which was helping to resettle the family, picked them up for an unplanned stopover with a chance to see America’s famous symbol of welcome.

“It was very confusing,” Bothina says of her family’s rocky arrival. “We always heard that America was the land of freedom.” 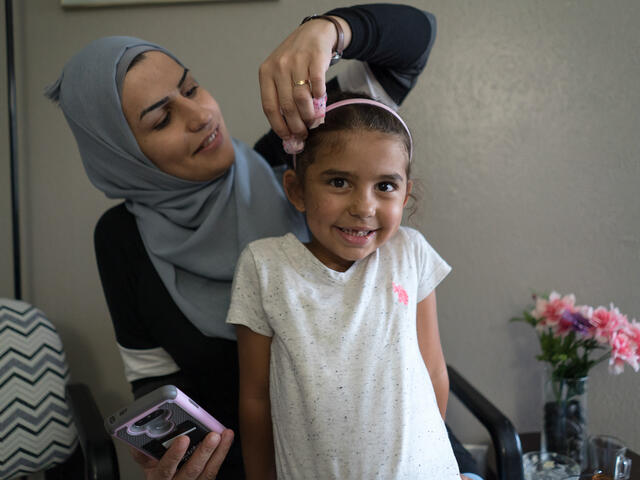 With pushback from the IRC, the American Civil Liberties Union and local community groups, Texas soon backed down, and a federal judge eventually rejected the state’s effort to block the resettlement of refugees. Four days after they arrived in New York, the Al Sharaas were finally en route to Texas.

The IRC office in Dallas helped orient the family, provided English classes, enrolled the children in school and connected the adults with job opportunities. Bothina and her mother-in-law, Huda, were invited to apply to Gaia Empowered Women, a Dallas-based fashion accessories company that employs refugee women as artisans.

Bothina, a former English teacher whose sewing skills were limited to making throw pillows, wasn’t sure she’d be a good fit for the job, but Gaia hired her and Huda. Bothina quickly become adept at working with colorful textiles, and her talent and acuity prompted Gaia’s founder, Paula Minnis, to promote her to artisan coordinator and trainer—a new role that draws on her teaching background. 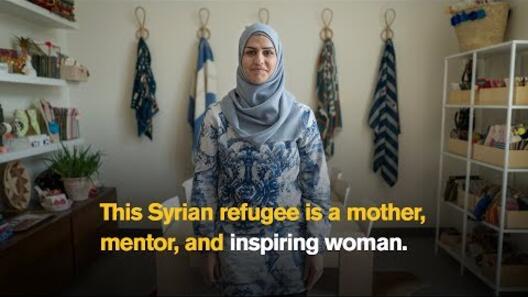 “She's taken this position and run with it,” Paula says of Bothina. “She's practically running the show now … helping to train, helping to do product development and design. She's here helping our company grow.”

Bothina’s promotion enabled her to buy a car, cutting her three-hour daily commute by bus to one hour. “That’s actually the goal here at Gaia,” Bothina explains. “To give refugee women a good wage so that they can provide for their family and for themselves.”

The company also offers flexible hours with opportunities to work from home, enabling Bothina to pick up her 5-year-old daughter, Jori, and 9-year-old son, Majed, from school. 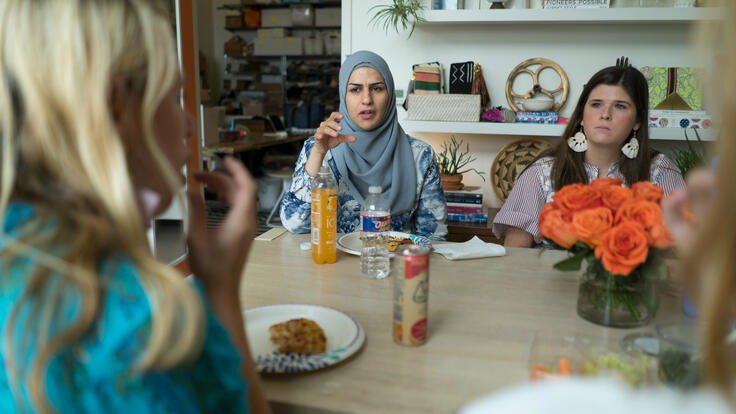 Bothina Matar with colleagues at the office of Gaia Empowered Women in Dallas, where she trains refugee women who are hired as artisans.
Photo: Andrew Oberstadt/IRC

The job has had other benefits for Bothina. “Starting to work right away after coming to the U.S. helped me build confidence,” she says. That confidence took Bothina all the way to Washington, D.C., when Rep. Marc Veasey, who represents her Texas community, tapped her to be a voice for refugees in an increasingly heated political climate.

“People who are coming as refugees, they are forced to flee their country—they didn’t leave by choice,” Bothina explains. “They want to start over and be able to give their kids and themselves a better life.”

People who are coming as refugees, they are forced to flee their country—they didn’t leave by choice.

The advice Bothina offers newcomers is a distillation of her own experience: keep looking ahead and set small goals you can reach. In her own case, first she established a savings account, then she studied to earn her driver’s license, then she bought a car—steps toward the larger goal of self-sufficiency.

Bothina Matar, her husband, Tamam Al Sharaa, and their two children, Majed and Jori, outside their home in Dallas.
Photo: Andrew Oberstadt/IRC

Bothina has set a new goal for herself: she wants to earn a master’s degree in design or business. She and Tamam, who had an electrical repair shop in Daraa and now works as an air-conditioning installer and technician, have even greater aspirations for their family: as much as they miss Syria, they want to buy a home in America and become U.S. citizens.

“When you start doing anything, at first it’s going to be frightening,” she reassures the refugee women she works with. She encourages them to strive for a better future—their children’s future—without forgetting their past. “I am trying my best,” Bothina tells them, “and succeeding somehow.”