‘I escaped ISIS’: How one Iraqi man was able to flee during the battle for Mosul

Thousands of people are fleeing their homes as the Iraqi army, Kurdish Peshmerga and coalition forces fight to retake Mosul — Iraq's second largest city — from the ISIS militant group.

Nearly 17,800 Iraqis have been displaced since the battle for Mosul began on October 17. Almost half of them are children.

People who fled surrounding communities are telling International Rescue Committee aid workers about the terror they endured living under ISIS. Here, one man describes his experience and his family's narrow escape as the battle raged. 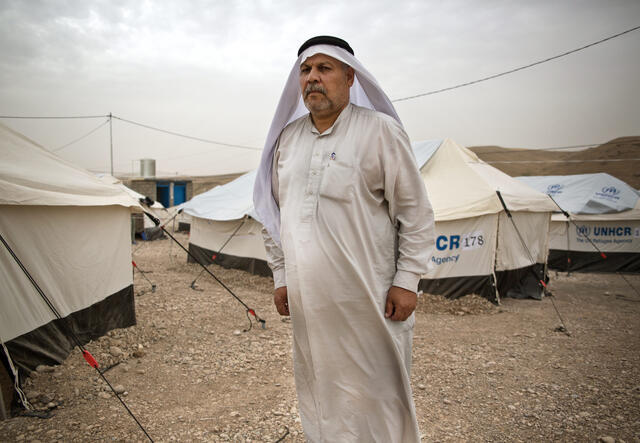 This man from a village just north of Mosul was able to flee with his family as coalition forces launched their attack on ISIS. "It was a miracle from God that we survived," he said. "For five days, we were surrounded."
Photo: Theresa Breuer/IRC

Who: Shepherd and village leader*
Age:  57
From: A village north of Mosul
Fled: Less than a week ago
Now staying in: Zelikan, a camp sheltering people displaced by the fighting

I fled with my family. There were 14 of us. I also left with my flock of sheep. I had 300 sheep, but half were killed in the battle outside my home. Those that survived are now free in the wild. There is no shepherd to look after them.

I was the Mukhtar (village leader), which according to ISIS makes me deserving of being slaughtered because they saw me as a government representative. So I had to hide my identity. I grew my beard, and would only travel on the back roads to villages in areas where people didn’t know I was a Mukhtar.

ISIS came to my village and told me that they were going to occupy my house. I told them I had nowhere else to go, but they told me ‘those who don’t listen to Islamic State will be killed.’ So I had no choice but to leave my home. We ended up staying for a year in an area between ISIS and the Peshmerga.

Mosul wasn’t the same city after ISIS came. It had lost its trade, its businesses. It was pathetic. You could tell how sad people were when you spoke to them.

I haven’t seen three of my sons for two years. One had to run away because he was trying to be elected as a government official in a town outside Mosul. He received death threats, so had to run away.

It was a miracle from God that we survived. For five days, we were surrounded. We couldn’t leave our home. There were airstrikes and bombs falling outside my home all the time. I thought one of my sons was killed by an airstrike as he herded the sheep. I was calling for him and one hit so close to him I thought he must be dead. Thank God he wasn’t.

We saw two suicide bombers on motorcycles riding towards the Iraqi army. The Iraqi army were firing at them and ISIS were covering them by firing back. Bullets went everywhere, hitting the car, our house, even our sheep.

The Iraqi army killed the suicide bombers with a missile. It was only 40m (131 feet) from our house.

Another suicide bomber tried to attack the army that same evening. It became too much. We couldn’t sleep that night because of all the firing and airstrikes, so before sunrise we decided to escape. We thought we would definitely be killed if we stayed. We got our sheep and started walking to the army. We walked more than 30 minutes until we saw the Iraqi army. The army started shooting over our heads to cover us, so that ISIS couldn’t shoot us.

We cried when we reached them. We were so happy to have escaped but we were still so scared.

The IRC has been working in Iraq since 2003. As people flee the fighting in and around Mosul, we are providing emergency cash to displaced families to help them pay for rent, food and other basics. We will help displaced Iraqis access healthcare and other vital services. We will also provide activities for children to help them cope, and will ensure women and girls are protected and supported.