On April 6 last year, Gloria Ibrahim, 29, and her family woke to the clatter of gunfire. They ran outside to find a cadre from Boko Haram, the radical Islamist militia that controls parts of northeastern Nigeria, rounding up villagers.

“They took my husband and his younger brother,” Gloria recalls, sitting in her father-in-law’s house in the city of Yola, a refuge from the violence afflicting rural areas. Outside, the harmattan trade wind that blows from the Sahara shrouds the sun.

“They killed them, and all other men above the age of 15,” Gloria continues, staring out a small window into the ghostly mist. “They took many women with them.”

An estimated 1.6 million people have fled their homes in Nigeria following attacks by Boko Haram. A staggering 400,000 have landed in Yola. Some 2,000 others have crossed the border into neighboring Niger,Chad or Cameroon.

Gloria and her children managed to escape into the hills. After weeks of sleeping in the bush, surviving on wild plants, they wandered into the town of Mubi. Their respite didn’t last long. 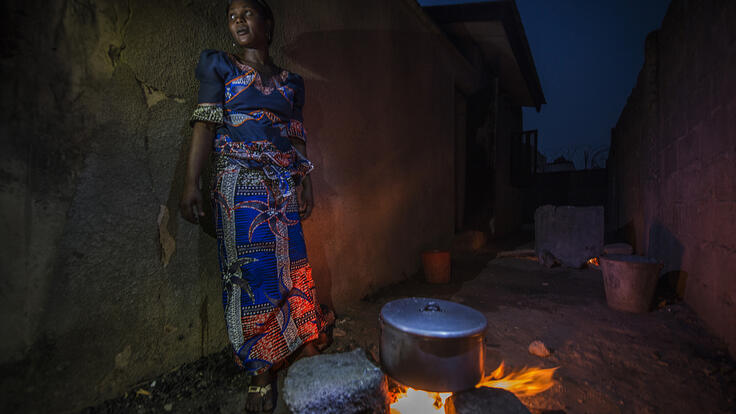 After her husband was killed by Boko Haram last year, Gloria Ibrahim fled to Yola, where she and her three small children now live with her father-in-law.
Photo: Peter Biro/IRC

In November, Boko Haram attacked again, looting Mubi’s shops, burning down houses and abducting women and girls. Once again, Gloria and her children were on the run.

“My husband’s family lives in Yola, so that’s where we went. On the way we were scared. We had nothing to eat. We went into the bush at the side of the road to rest for 10 minutes, then we walked again.”

Like the vast majority of displaced people in Yola, Gloria and her children crammed into an already crowded home. Others less fortunate squat in abandoned buildings.

“It is an enormous task,” says Simon Clarke, the IRC emergency project director in Nigeria. “Meanwhile, there’s no schooling, food is scarce and families barely scrape by.”

In Yola, the IRC works around the clock to provide water, food, informal schooling, latrines, emergency shelters and other aid to the displaced population. But workers know their efforts are a race against time.

“With people living so closely together, it’s very easy to pick up diseases,” Clarke says. “Soon the rainy season will be upon us, and with open sewers and latrines that aren’t properly covered, there’s a real risk of outbreaks of cholera and other diseases.”

For Gloria, the city experience has been unsettling and bewildering.

“I don’t know anyone here. Boko Haram burnt down our house and killed our goats so we came with absolutely nothing.” 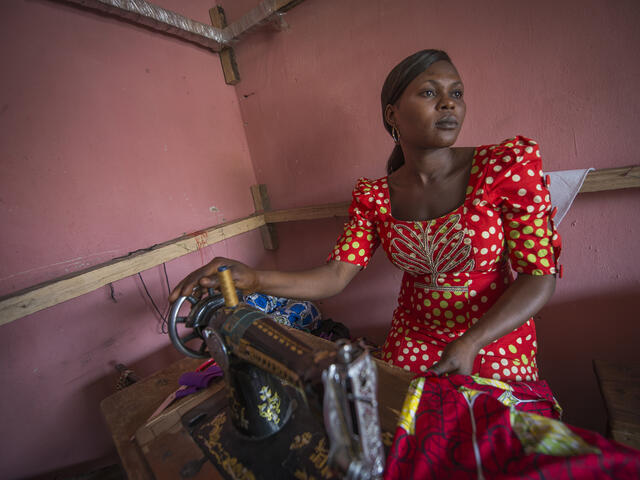 Gloria secured an apprenticeship with a local tailor in Yola, hoping to learn enough to open up her own business.
Photo: Peter Biro/IRC

The IRC has assisted Gloria with food, water and basic necessities such as mosquito nets and hygiene supplies.

The IRC and a local partner have also helped Gloria secure an apprenticeship with a local tailor. She spends three hours there each day gaining valuable experience.

“I want to learn the trade so that I can afford to look after my family.”

The people in Yola and those sheltering in other towns and cities across northeastern Nigeria live with uncertainty. An ongoing military offensive conducted by the Nigerian army and allies from neighboring countries has succeeded in driving Boko Haram from some areas under its control. But the battle is far from over.

“I don’t want to go home. It’s still too dangerous. And what can I go home to? Our cows, goats, beans — all gone. They have destroyed everything.”

Story was originally published on Medium