The crisis in northeastern Nigeria is man-made, but the solutions are too.

A baby I met at an International Rescue Committee clinic in Maiduguri was injured by Boko Haram before he was even born. Four months after his mother, Kawsey, was shot in the chest and shoulder by insurgents while running through the bush to escape an attack, his eyes dart back and forth uncontrollably – an eerie reminder of the traumatic circumstances under which he was brought into this world, and of the little opportunities he will have ahead. Yet Kawsey ended up at this clinic not because of her gun wounds, but because her baby is severely malnourished. “There is no food,” she told me, during yet another unsuccessful attempt to breastfeed her son. They had survived against all odds, but her miracle baby was now hanging on for dear life.

I have been rewriting this story for a week now. How can I come up with a headline that is compelling enough to make you want to read my story and be outraged by the events I describe? How do I make sure that you understand the urgency of the situation, and the tangibility of a solution? After all, this is, in the end, another story about starving children in Africa. You know it’s important, but there are too many crises in the world: “Nothing will change. It’s just the way it is. There is nothing we can do about it.” 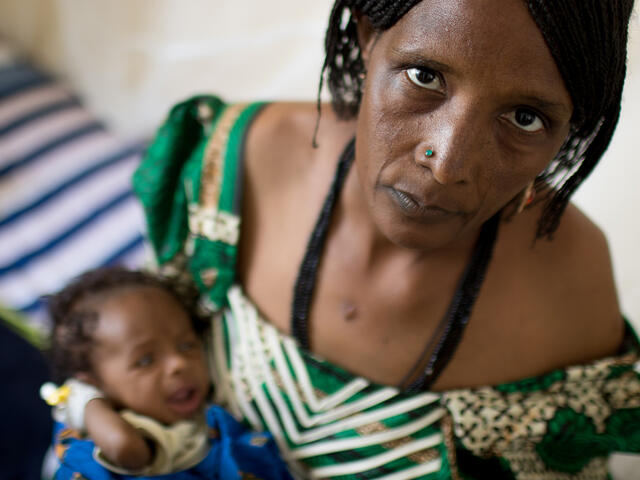 Kawsey was shot twice by Boko Haram while pregnant with her son when fleeing her home late last year. Mother and baby are being cared for at an IRC center in the city of Maiduguri that treats the most severe and complicated cases of malnutrition.
Photo: Juliette Delay/IRC

Except that you are wrong. There are over two million reasons to be outraged, and we have the solutions to address them if only we pay attention and act—not tomorrow, but today. Despite the massive scale of this crisis, the 2017 humanitarian appeal is only 1.8% funded.

A little over a year ago, Maiduguri and all of Borno State were too dangerous even for the most intrepid humanitarian. It was the birthplace and center of operations of Boko Haram, the deadliest terrorist group in the world. The insurgents started targeting schools, then mosques and markets, then the military . They engaged in “scorched-earth policy,” arriving in a town or village and burning it to the ground, killing innocent men and women and abducting young girls. 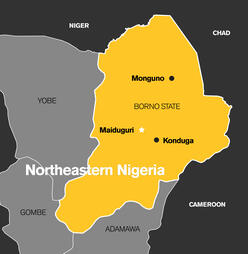 Now that Boko Haram has largely been driven out of Maiduguri, those terrorized in surrounding villages have sought refuge and safety here. Boko Haram has destroyed their homes, their livelihoods. There are no schools. There are no health centers. There is no food. Sarah Ndikumana, who has been the IRC country director for Nigeria for the past two-and-a-half years, told me, “We are seeing famine-like conditions for many of these populations who have been stranded, isolated, and terrorized under Boko Haram.”

Kawsey’s experience is not unique. Everyone in Maiduguri has a story to tell, each one just as horrifying as the next. So many lives wasted for no good reason. Aisha, a 12-year-old girl, has had nightmares since Boko Haram killed her uncle right in front of her two years ago. “I had a heart break,” she told me. Maryam, a patient at the IRC-run reproductive health center in Bakassi camp, recounts pregnant women giving birth “on the spot” while fleeing an attack. Abubakar Musa, a longtime educator in Maiduguri, “saw corpses littered in the streets…corpses of people who are supposed to have used their lives for important things.” 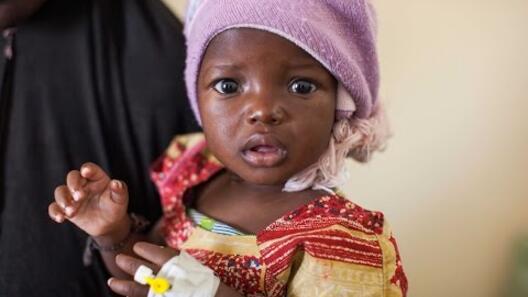 The beds in the clinic are all taken as the war against Boko Haram rages on, and the tiniest generation of Nigerians is grappling with a near-famine. Over 2 million children have severe acute malnutrition. If the situation is not addressed, 205 of them will die each day. Right now, we cannot even meet the needs of the people in Maiduguri—and they are the "lucky" ones. Increased access into newly retaken areas is opening all of our eyes to the sheer scope of this tragedy as populations are receiving assistance for the first time in years.

We saw this coming, and yet we don’t have a system in place to address predictable crises early. This is why we need better aid. The earlier we respond, the cheaper it is and the more lives we save. Over 5 million people are now facing critical food deficits in northeastern Nigeria. We cannot wait until a famine is declared, because that designation means that people are already dying—by definition, that response would be too late. 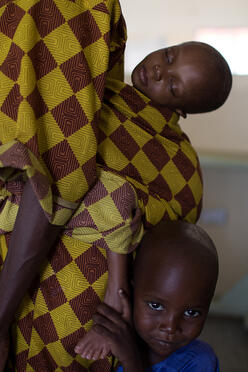 Do I have your attention yet? We are facing a lost generation—a generation of children who, even if they make it to their fifth birthday, will be emotionally and physically stunted; who will not have the opportunity to go to school, get a job, and live in a safe and stable environment. There is no better way for Boko Haram to recruit than within a context of impossible choices.

Almost every household has taken in displaced families, and households of five now must feed 25. Yet not once did I hear someone complain. Quite the contrary. “We in Maiduguri, we have seen suffering. We have seen real suffering,” Abubakar said. “No matter how little we have, we shared. We tried to help because […] we know the conditions we also found ourselves [in] when the heat was on in Maiduguri. That was how we took in these refugees. We did that wholeheartedly.”

And what are we doing in some other parts of the world? Banning refugees. Sending them home, abandoning any common decency.

The truth is, no one can survive in circumstances like these in Nigeria. We must do more. These children, women and men deserve the opportunity to start over, to create businesses and jobs, to go to school, to feel safe. The IRC and other humanitarian groups working in northeastern Nigeria seek to provide these opportunities. But until others join us, until the world wakes up and pays attention, nothing will change. Children will continue to die, schools will remain closed, and the cycle of despair will never end for the people of northeastern Nigeria.

Boko Haram, the world's deadliest terror group, has largely been driven out of Maiduguri, a sprawling city in northeastern Nigeria. People terrorized in surrounding villages have sought refuge and safety here. Boko Haram has destroyed their homes, their livelihoods. There are no schools. There are no health centers. There is no food. Photo: Kellie Ryan/IRC 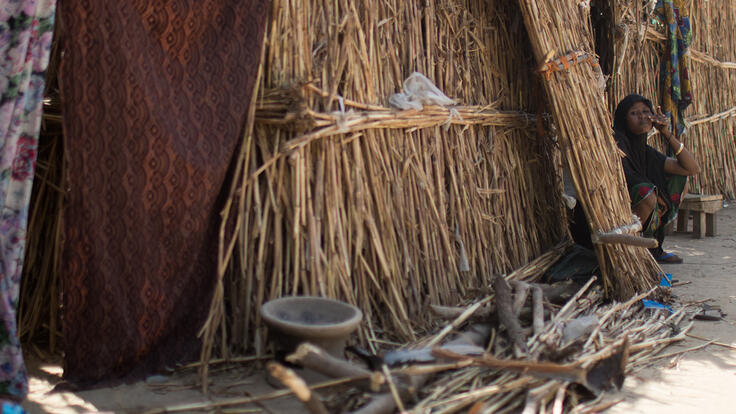 Many Nigerians displaced because of the war against Boko Haram are living in makeshift shelters or staying with other families in and around the city of Maiduguri. Locals have welcomed those fleeing the fighting with open arms, and share what little they have. Photo: Juliette Delay/IRC 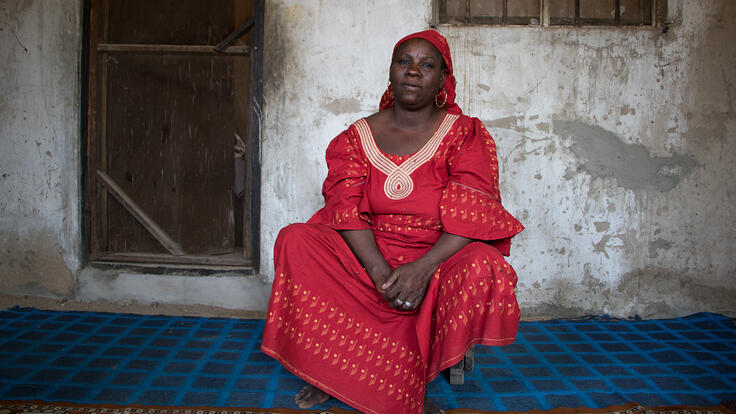 Aisha left everything behind when she fled as Boko Haram attacked her village in Bama. She now shares a small room in Maiduguri with her 12-year-old son Usmain. “What’s next is you live life in patience,” she said. Photo: Juliette Delay/IRC 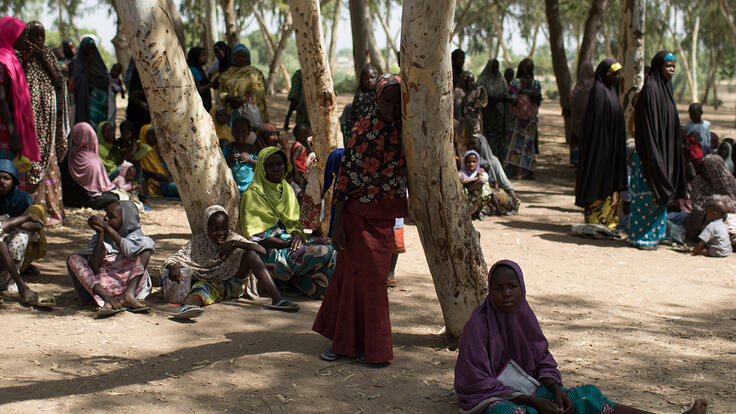 Most displaced families like Aisha's are living within host communities rather than official camps. The IRC sends mobile clinics to reach them with vital health care. Here, women and children wait for their turn to be examined at an IRC-run clinic in Maiduguri. Photo: Juliette Delay/IRC 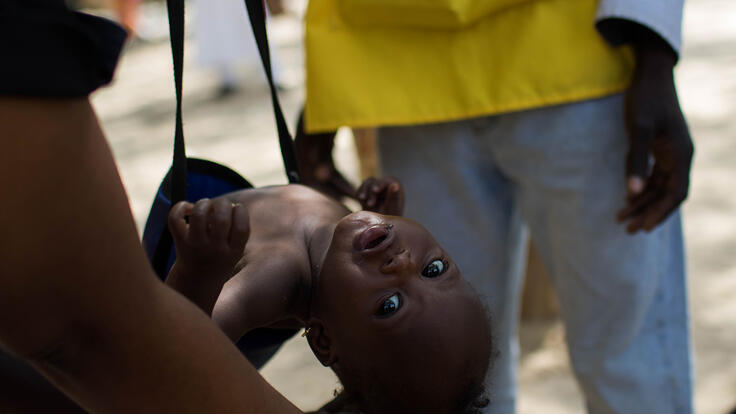 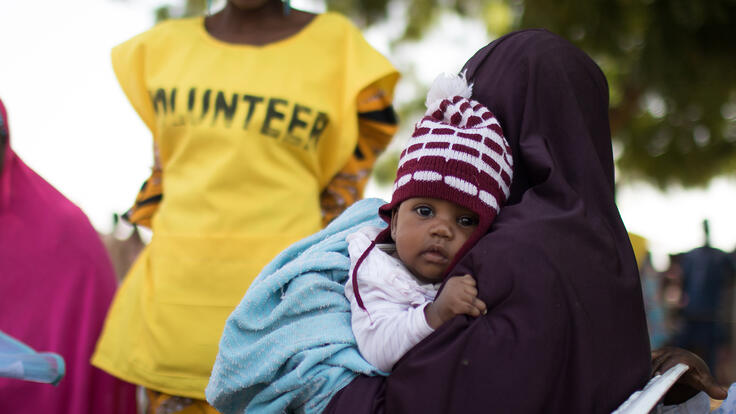 A mother and baby wait their turn for an arm-band test, used to identify signs of severe acute malnutrition in children. The most serious cases are referred to the IRC malnutrition stabilization center in Maiduguri, where over 80% of patients under 5 recover.  Photo: Juliette Delay/IRC

Famata's baby daughter, also named Famata, was referred to the malnutrition stabilization center by IRC staff when her weight started falling. The nine month old was severely malnourished when she came in to the center for treatment. Photo: Kellie Ryan/IRC 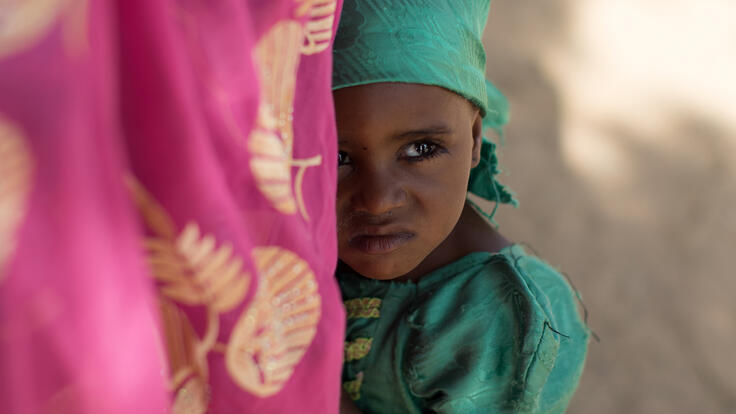 A little girl hides behind her mother’s skirt as she waits for her sister to be screened for severe acute malnutrition at a mobile health clinic. Over 5 million people in northeastern Nigeria struggle to get enough nutritious food. Photo: Juliette Delay/IRC 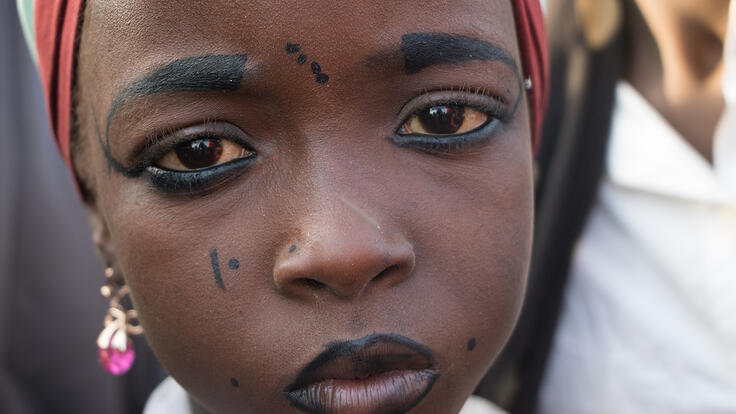 Malnutrition is far from the only cause of suffering for children in northeastern Nigeria. Many children are traumatized after having witnessed horrors of the war. The IRC runs "safe spaces" in Maiduguri for them, places where they can go every afternoon to learn and play again, and start to heal. Photo: Juliette Delay/IRC 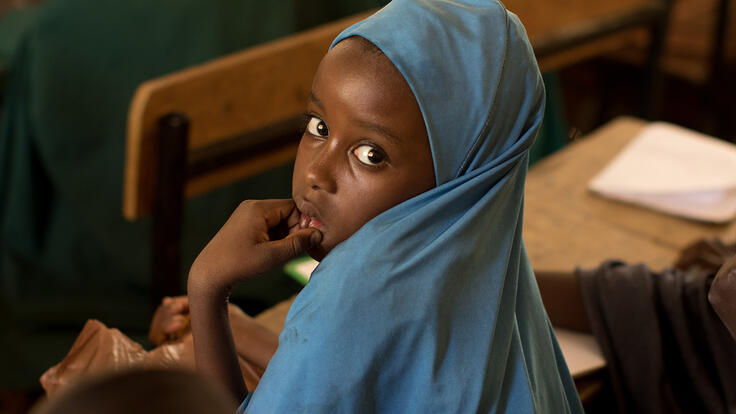 The IRC, with our partner Creative, also runs education programs for children affected by the crisis, using techniques proven to reverse the effects of trauma and help children get back to learning. Photo: Juliette Delay/IRC 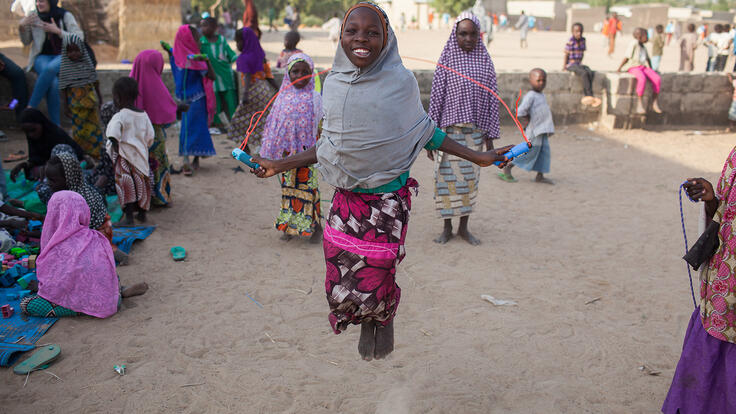 Half of the 1.8 million people displaced by the war against Boko Haram in Nigeria are children. Health programs to prevent severe acute malnutrition, as well as safe spaces like this one in Maiduguri, are vital to help children survive and thrive as the crisis continues. Photo: Kellie Ryan/IRC