A refugee’s dream of home comes true after 20 years

When he was 16 years old, Robert Sebatware started a diary. He didn’t know if he was a good writer or not; he wasn’t able to finish high school, since he couldn’t afford the fees. Regardless, Robert felt a sense of relief as he scribbled down his experiences, thoughts and feelings.

“One might say: I am a dreamer, a young bird growing its wings,” he wrote in one of his entries. “Call me whatever you please but I am young and determined to expand my horizons. I am hopeless and lose weight when I flash back to the past, but I regain when I look forward to the future.”

That entry addressed the harsh realities of growing up in a refugee camp in Uganda, where Robert would live for more than 20 years after escaping war in Democratic Republic of Congo. He also wrote about his most cherished aspirations: to establish a real home, obtain an education, and live a purposeful life.

“I am a young boy with a lot of zeal for life, a lot of life energy for happiness and with a vision,” he wrote.

At the age of 28, Robert has fulfilled some of his dreams—he now lives in America, enjoys a steady job, bought his first house, and is saving to go back to school. 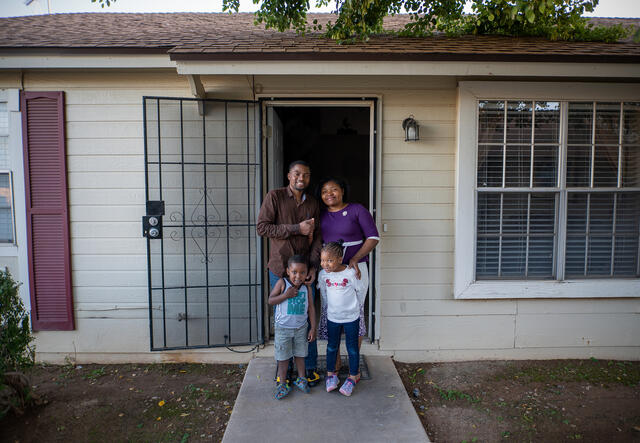 Robert, 28, and his wife Esther, 25, stand with their two children outside their home in Phoenix, Arizona. The family was resettled by the International Rescue Committee after living 20 years in a refugee camp.
Photo: Andre Oberstadt/IRC

Robert was just four years old when the massacre happened. He remembers it was a Tuesday—Tuesdays were when his parents would go to market. His neighbors kept an eye on him as he kicked around a soccer ball. At one point, Robert heard loud noises. At first, he thought the sounds were some sort of alarm to warn the community of buffalos entering the town.

“But it was war,” Robert says.

The noises were gunshots. Robert saw his neighbors running. Unaware of what was happening, he ignored the chaos and continued to play—until bullets flew in front of him. 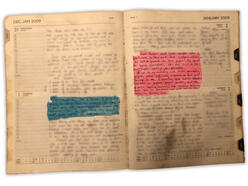 While living in a refugee camp, Robert enjoyed writing down his experiences, thoughts and feelings in a diary he started when he was 16 years old.
Photo: Courtesy of Robert Sebatware

“I saw fire. The bullets were coming so close to me. I started crying. I shouted ‘Mom!’ but my mom was not around. Then my auntie, she lived close by, started calling.

Robert was hit repeatedly with the barrel of the gun. One of the men put his hand over his mouth so he wouldn’t scream. The four-year-old was forced to watch as another man decapitated his aunt.

“Then, they beat me almost to death.”

Robert was left lying among dead bodies for several days, he later learned. An anonymous woman picked him up, wrapped a blanket around his small body, and carried him across the border to Uganda, where she handed him to the American Red Cross. He was rushed to the hospital and later, miraculously, was reunited with his parents in a refugee camp. 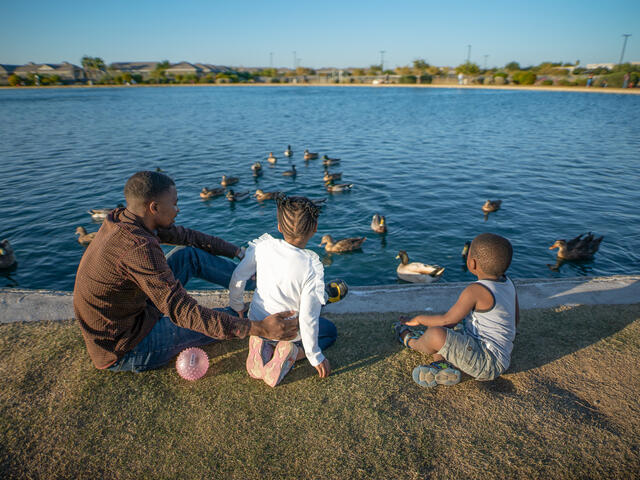 Robert loves spending time with his children. It’s important to him to be a role model, he said. “I want them to know they can do anything.”
Photo: Andrew Oberstadt/IRC

‘I never thought I could do this…’

Robert turns quiet after recounting his story. He folds his hands neatly on his lap; his eyes are wide and bright.

Despite the pain and trauma that he carries with him to this day, he feels that sharing his story helps him to remain resilient as he starts a new life in the United States.

Robert was resettled by the International Rescue Committee in Phoenix in 2016. He came to America with his wife, Esther, who is 25, and their children, Sandra, 5, and Agape, 4. The couple’s toddler, Raza, was born in Arizona.

The IRC helped Robert and Esther find jobs at a warehouse—Esther works morning shifts and Robert evening hours. With the IRC’s support, the couple saved money and built up credit. They enrolled in English classes and studied American culture and laws. And they managed to buy a house.

“It was really a dream,” Robert says, describing the day he received the keys to their home. “I never thought I could do this in America.” 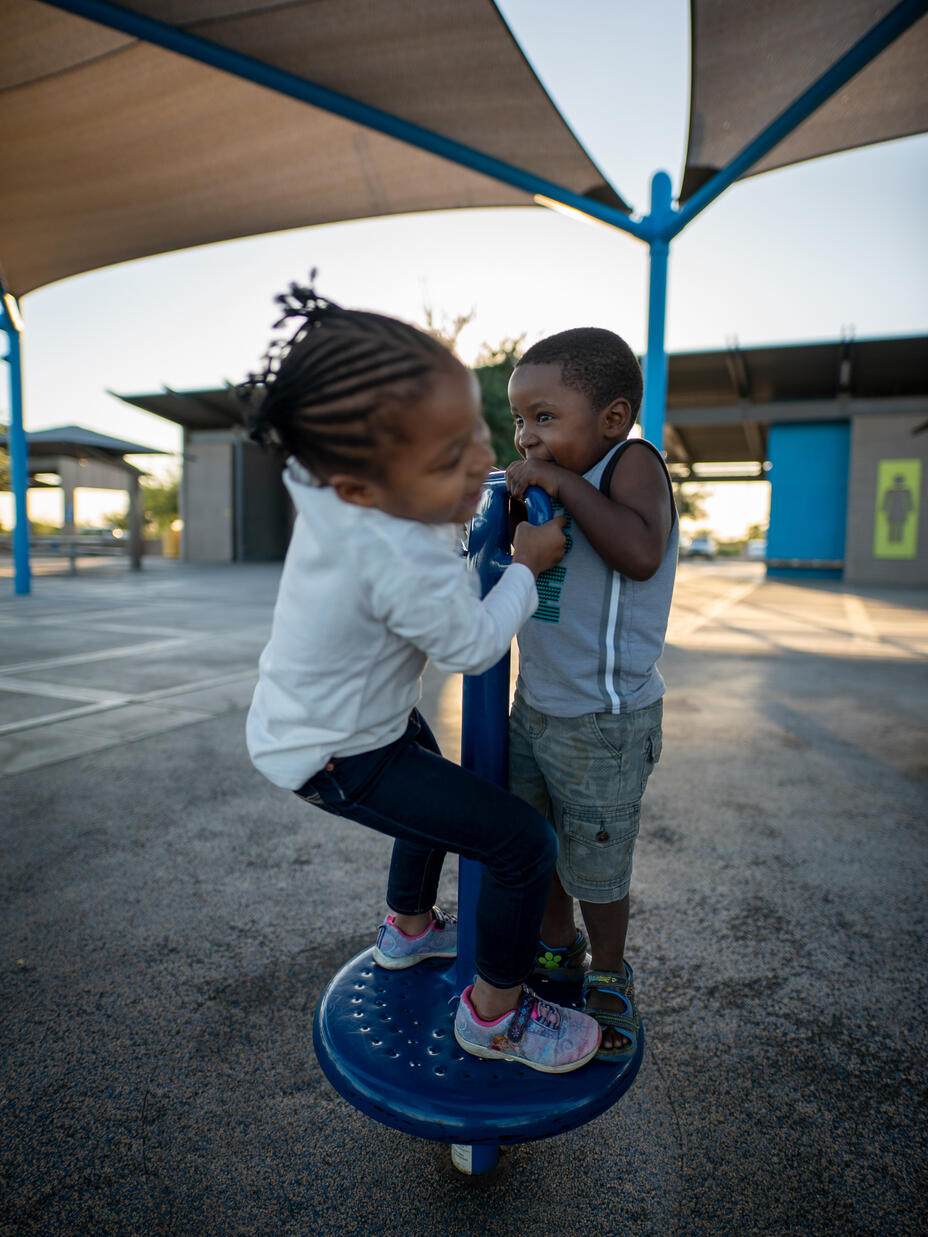 Five-year-old Sandra plays with her little brother, Agape who is four, at a nearby park. “Sandra loves school,” Esther says. “She wakes up during the weekend and asks to go to school.”
Photo: Andrew Oberstadt/IRC

‘We are human beings looking for hope’

When Robert reflects on how much his life has changed, he always comes back to the same realization: “Refugees can almost do anything if they are given the opportunity.”

This is the message he gave to a group of college students at Arizona State University where recently he was invited to speak.

“I will never stop speaking about refugees, because they’re my family,” he says. “We share similar experiences. No matter where we are from. I told [the students that] refugees are people who are trying to take new steps in life...We are human beings looking for hope.”

Robert still regrets not finishing high school, and he wants to resume his studies with a focus on human rights. “I want to defend people,” he says, speaking with passion. Robert is determined to accomplish this goal, no matter how long it takes. When things get tough, he looks back at that diary entry he wrote at 16.