Samah,* a Syrian refugee seeking to resettle in the United States, knows all too well what "extreme vetting" looks like. She went through it herself. After several intensive interviews and stringent security screenings, the 23-year-old was immensely relieved when she was told her family would be able to start a new life in America.

Her husband, Mohammed, had dreams of pursing a master’s degree in economics. Knowing his family would be resettled in two months time, he gave up a scholarship offered by the United Nations after spending a fortune obtaining documentation and college transcripts from Syria and Jordan.

But days before departing to the land of freedom—a phrase they themselves used—the couple, who have two small children, received devastating news: They had been banned from entering the United States.

One of President Trump's first executive orders, issued on Jan. 27, suspended the entire U.S. refugee resettlement program and barred citizens of seven predominantly Muslim countries from entry to the U.S. The order, issued to allow for a 120-day security review, was negated by an appeals court. The administration issued a new order, which has been blocked by a Hawaiian federal court. As this process plays out, people like Samah and Mohammed remain effectively stranded, their lives in limbo. 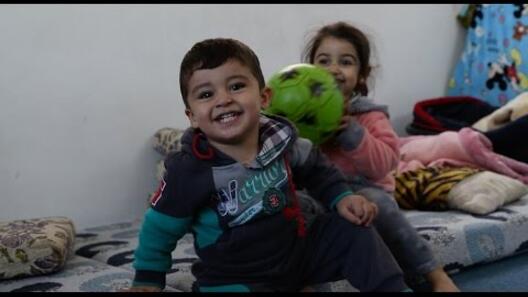 “When this decision was released, I was shocked,” Samah says. “We thought we finished the process, but now are we going to repeat the process again? It’s difficult. How long do we have to wait? All our bags were packed and we finalized everything.” She stopped working as a community health volunteer for the International Rescue Committee in Irbid, Jordan where the couple had lived for the past four years.

Although the orders and policy changes suggest that the U.S. has been lax in vetting refugees, Mohammed and Samah say they were investigated for two years—a “hectic” process that involved screenings by many government authorities including the Federal Bureau of Investigation, the Department of Homeland Security, the Department of Defense and other security and intelligence agencies. 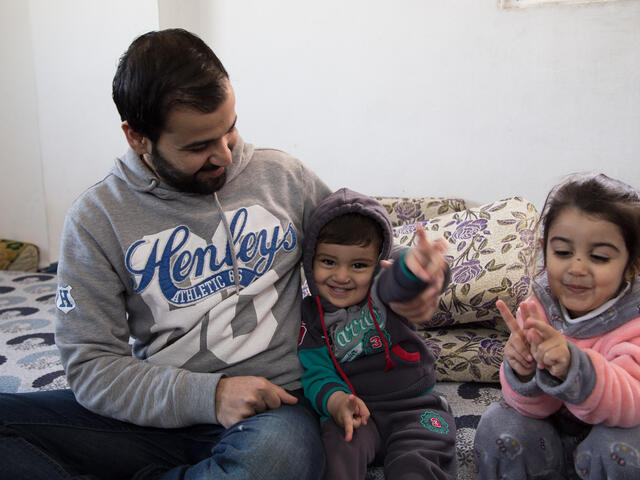 27-year-old Mohammed with his son Khaled (center) and niece. Mohammed and his family were scheduled to arrive to Illinois when the first executive order was issued on Jan. 27 barring Syrian refugees.
Photo: Kaity Kawar/IRC

Mohammed’s attempt to escape the war that destroyed his country, and to resettle his family in a safe haven, began in November 2012 when he and his brother fled their hometown, Dara’a, for Jordan. (The rest of his family, including Mohammed’s fiancé at the time, followed a year later.)

The two landed in Zaatari refugee camp, where Mohammad lived for two and half years before moving to Irbid to find work. But jobs proved elusive—Jordan has strict restrictions on work permits for refugees and limited opportunities.

Mohammad began to volunteer with the IRC and soon became a supervisor for its health program, where he manages eight other volunteers who visit vulnerable refugee families to educate them about available primary and reproductive services.

If they don’t want to help us go back to Syria and end the war...then we would like to live a dignified life in any other country.

When Samah was able to join her husband in Irbid, she also volunteered with the IRC. Both received small stipends —“I couldn’t stay without working,” Samah says—but both were determined to resettle in a country that would provide opportunities for their children.

The young couple had their first interview for refugee resettlement on June 1, 2015. Four months later, they underwent a second interview. It took another year to proceed to the final interviews, medical checks and orientation sessions on American culture and customs. Finally, the family was ready to embark on a better life.

Now, uncertain of the future, the family admits they are afraid to go to America, where they feel the door was shut on them unfairly.

“I would like to say to the world that one’s homeland is irreplaceable, but if they don’t want to help us go back to Syria and end the war, and for us to live in peace and stability, then we would like to live a dignified life in any other country,” says Mohammed. 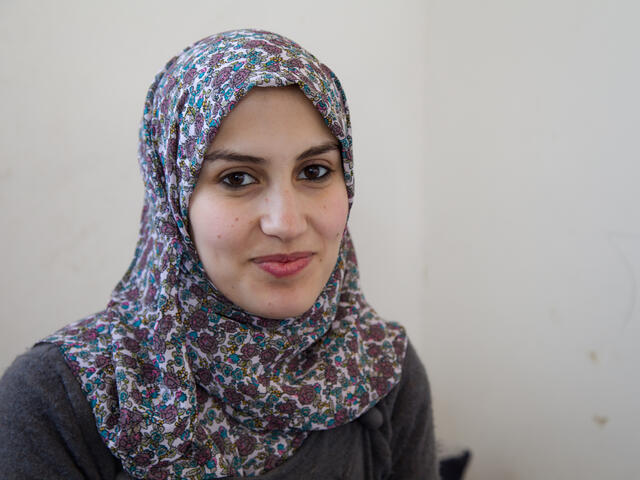 Samah, 23, was eager to start a new life with her family. "I want my children to be something great in the future," she says.
Photo: Kaity Kawar/IRC

Samah, who holds an education degree, still views America as a county of opportunities where, with hard work and determination, people like herself can rebuild their shattered lives.

“The thing I liked about the U.S. is, as they told us, the effort you put in your work gets you results,” she says.

“We were very happy and optimistic about resettling,” she concludes. “We thought we would be able to secure a better life and continue our education. We’re still young; we still have our lives ahead of us. I want my children to be something great in the future.”

Update, Jan. 9, 2018: The Supreme Court has allowed the third version of the Trump Administration "travel ban" to take effect, which will suspend refugee arrivals. The ban has separated families, put more vulnerable people in harm’s way, and will not make the country safer. Learn more.