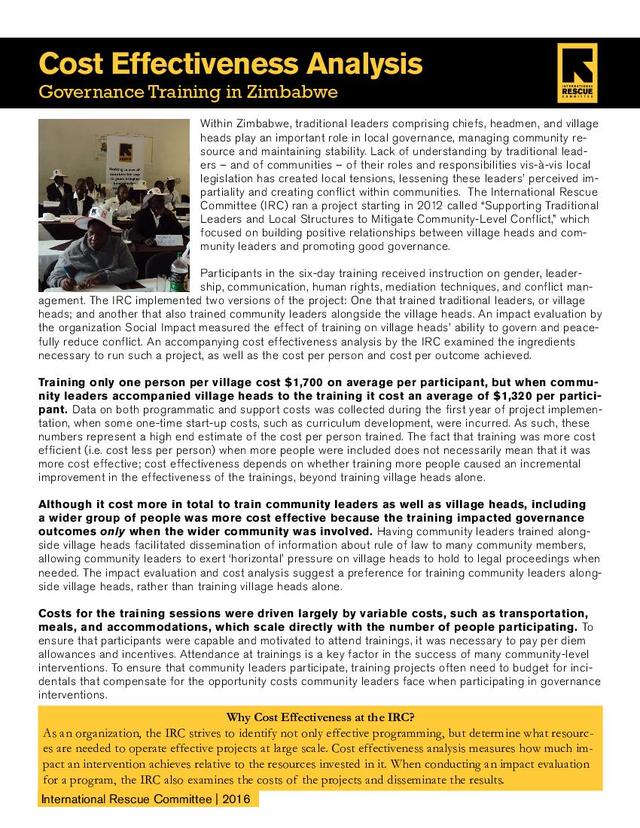 Participants in the six-day training received instruction on gender, leadership, communication, human rights, mediation techniques, and conflict management. The IRC implemented two versions of the project: One that trained traditional leaders, or village heads; and another that also trained community leaders alongside the village heads. An impact evaluation by the organization Social Impact measured the effect of training on village heads’ ability to govern and peacefully reduce conflict. An accompanying cost effectiveness analysis by the IRC examined the ingredients necessary to run such a project, as well as the cost per person and cost per outcome achieved.

Training only one person per village cost $1,700 on average per participant, but when community leaders accompanied village heads to the training it cost an average of $1,320 per participant. Data on both programmatic and support costs was collected during the first year of project implementation, when some one-time start-up costs, such as curriculum development, were incurred. As such, these numbers represent a high end estimate of the cost per person trained. The fact that training was more cost efficient (i.e. cost less per person) when more people were included does not necessarily mean that it was more cost effective; cost effectiveness depends on whether training more people caused an incremental improvement in the effectiveness of the trainings, beyond training village heads alone.

Costs for the training sessions were driven largely by variable costs, such as transportation, meals, and accommodations, which scale directly with the number of people participating. To ensure that participants were capable and motivated to attend trainings, it was necessary to pay per diem allowances and incentives. Attendance at trainings is a key factor in the success of many community-level interventions. To ensure that community leaders participate, training projects often need to budget for incidentals that compensate for the opportunity costs community leaders face when participating in governance interventions.