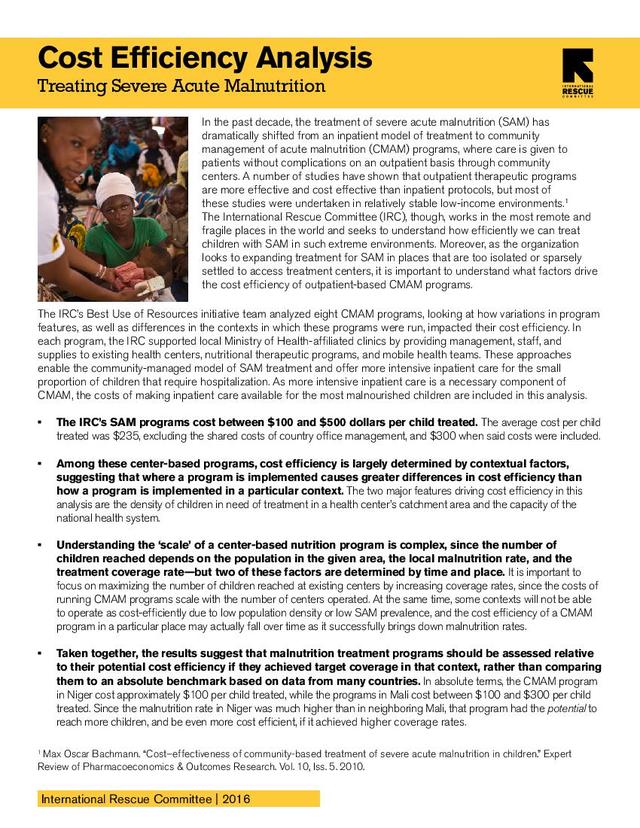 In the past decade, the treatment of severe acute malnutrition (SAM) has dramatically shifted from an inpatient model of treatment to community management of acute malnutrition (CMAM) programs, where care is given to patients without complications on an outpatient basis through community centers. A number of studies have shown that outpatient therapeutic programs are more effective and cost effective than inpatient protocols, but most of these studies were undertaken in relatively stable low-income environments.

The International Rescue Committee (IRC), though, works in the most remote and fragile places in the world and seeks to understand how efficiently we can treat children with SAM in such extreme environments. Moreover, as the organization looks to expanding treatment for SAM in places that are too isolated or sparsely settled to access treatment centers, it is important to understand what factors drive the cost efficiency of outpatient-based CMAM programs.

The IRC’s Best Use of Resources initiative team analyzed eight CMAM programs, looking at how variations in program features, as well as differences in the contexts in which these programs were run, impacted their cost efficiency. In each program, the IRC supported local Ministry of Health-affiliated clinics by providing management, staff, and supplies to existing health centers, nutritional therapeutic programs, and mobile health teams. These approaches enable the community-managed model of SAM treatment and offer more intensive inpatient care for the small proportion of children that require hospitalization. As more intensive inpatient care is a necessary component of CMAM, the costs of making inpatient care available for the most malnourished children are included in this analysis.