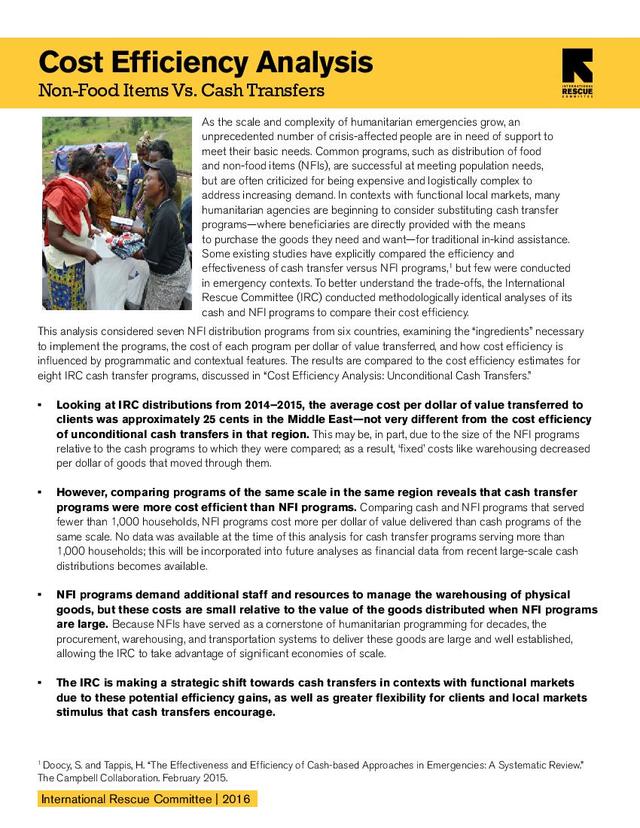 As the scale and complexity of humanitarian emergencies grow, an unprecedented number of crisis-affected people are in need of support to meet their basic needs. Common programs, such as distribution of food and non-food items (NFIs), are successful at meeting population needs, but are often criticized for being expensive and logistically complex to address increasing demand. In contexts with functional local markets, many humanitarian agencies are beginning to consider substituting cash transfer programs—where beneficiaries are directly provided with the means to purchase the goods they need and want—for traditional in-kind assistance. Some existing studies have explicitly compared the efficiency and effectiveness of cash transfer versus NFI programs, but few were conducted in emergency contexts. To better understand the trade-offs, the International Rescue Committee (IRC) conducted methodologically identical analyses of its cash and NFI programs to compare their cost efficiency.

This analysis considered seven NFI distribution programs from six countries, examining the “ingredients” necessary to implement the programs, the cost of each program per dollar of value transferred, and how cost efficiency is influenced by programmatic and contextual features. The results are compared to the cost efficiency estimates for eight IRC cash transfer programs, discussed in “Cost Efficiency Analysis: Unconditional Cash Transfers.”