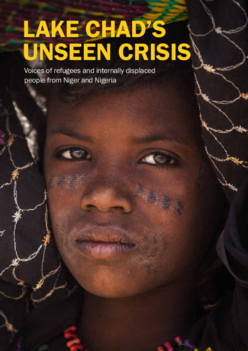 The violent seven-year conflict originating in Nigeria has intensified in the last three years and spread across borders into Niger, Chad and Cameroon, causing a growing humanitarian crisis in a region known as the Lake Chad Basin.

This is Africa’s fastest growing displacement crisis. It is taking place in one of the poorest and most fragile parts of the world — out of sight and out of mind of world leaders. Across the Lake Chad Basin countries, 21 million people are affected by the crisis.
9.2 million are in desperate need of humanitarian assistance, and over 2.6 million people have been forced to flee their homes in search of safety and protection.

There is no sign that the conflict will end in the near future. With the onset of both the lean season and the rainy season from July until September, Nigeria is officially experiencing an economic crisis, and predicted severe flooding makes the prospects for
the region grim. Despite the scale of the crisis, it receives very little attention; knowledge of it is not widespread and only 25 percent of the $562m requested for the Lake Chad Basin humanitarian response has been received as of August 15, 2016.

Millions of people remain unassisted. With both host and displaced communities exhausting their resources and falling deeper into poverty; with localized famine-like situations developing, and high mortality rates from malnutrition and disease; and with people at risk of neglect, violence and exploitation even within official camps, the humanitarian response needs to rapidly improve to save lives and protect those in need.

This paper aims to give a voice to some of the women, girls, boys and men displaced by this violence, as well as to their generous hosts. 35 displaced people and host families living in seven locations in Nigeria and Niger were interviewed during April and May 2016. They told us that one of their main challenges was access to food and income-earning opportunities; they do not want to depend on others. They recounted some of the violence and abuses they had experienced and their ongoing insecurity, and expressed a simple wish for education, healthcare and water for their children.