5 health crises that endanger Ukrainian lives as the war continues

As the senseless attacks on hospitals and civilians in Ukraine shock the world, lives are also at risk from serious health crises growing behind the headlines.

More than 90 attacks on health facilities, ambulances and staff have shaken Ukraine since the start of the Russian invasion.* Although targeting health care providers violates international humanitarian law, such attacks have become increasingly common not only in Ukraine but also in Syria, Yemen and other conflicts.

War also fractures entire health systems and the longer a conflict continues the harder it will become to access care, with people dying otherwise preventable deaths as a result. People who are injured in an attack may not be able to receive emergency treatment. Those who fall ill may not get a diagnosis and the care they need. People with chronic conditions such as asthma or diabetes may be unable to access medications. Women may lose vital sexual and reproductive health services. And survivors of violence and abuse may not receive urgently needed medical and mental health support.

Safe water may also become harder to access, contributing to the spread of infectious disease and making the ongoing public health crisis much worse.

The IRC is shocked and appalled at this senseless killing of civilians in Bucha.

The conflict in Ukraine has gone on far too long and the international community must step up its efforts to find a diplomatic solution. Civilian life must be protected. https://t.co/ryYzeHEmhS

“Our experience in places like Syria demonstrates that protracted conflict and systemic attacks on health infrastructure can cause health care professionals to leave the country,” says Dr. Mesfin Teklu Tessema, senior director of health at the International Rescue Committee (IRC). “This results in further strains on the system and lack of access to care for those that need it most.”

Here is a closer look at five growing health crises Ukraine is facing amid the ongoing war:

A recent photo of a woman being evacuated from a maternity ward in the hard-hit Ukrainian city of Mariupol showed the world the dire impacts of the Russian invasion on maternal and newborn health. More than 4,300 babies were born in Ukraine between Feb. 24 and Mar. 13 alone, many of them in basement bomb shelters. Some 80,000 Ukrainian women are expected to give birth in the next three months—not knowing if they will have prenatal care, a safe delivery or follow-up visits with their health team. The World Health Organization estimates that 15% of pregnancies will experience complications that require skilled medical care–but oxygen and medicines are scarce. As Ukraine’s health system buckles under the weight of the conflict the risks to the lives and health of mothers and babies will only continue to grow.

As the global COVID-19 pandemic continues, Ukraine reported its highest daily case count on February 10—just two weeks before the war began. Less than 40% of Ukraine’s population is vaccinated against COVID-19. While the vaccination rate in the capital Kyiv is 65%, it is as low as 20% in some regions of the country. The Russian attacks have disrupted peoples’ access to health care, including COVID-19 vaccinations, tests and treatment. At the same time, people are having to crowd together in bomb shelters during attacks, or at border crossings as they flee the country, creating conditions ripe for the spread of the coronavirus. 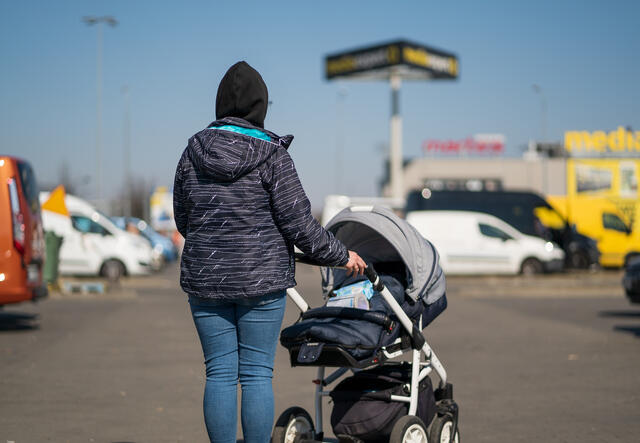 Helen, 26, waits with her 5-month-old son for a bus in a refugee reception center in Poland to find safety in Italy after Russian bombs began to fall on her hometown in western Ukraine. "There's no place to hide with such a small child," she says.
Photo: Andrew Oberstadt for the IRC

Ukraine was already experiencing a polio outbreak when Russia’s invasion disrupted a campaign to vaccinate children in the impacted region. The highly contagious polio virus largely affects children under 5 years of age and can infect the spinal cord, causing paralysis and death. While vaccinations can prevent the virus from spreading from person to person, polio vaccination rates are below 50% in some areas of Ukraine, including its second-largest city, Kharkiv. This is a source of grave concern for global public health experts who have been working to eradicate polio worldwide.

HIV is a virus that attacks the body’s immune system. Left untreated, it can lead to AIDS (acquired immunodeficiency syndrome). Ukraine has the second highest rate of HIV/AIDs in Eastern Europe, with approximately 1% of its population infected with HIV or AIDS. Infection rates are especially pronounced among more marginalized communities such as those who use intravenous drugs and men who have sex with men. The war will make it harder for Ukrainians to learn their HIV status, access treatment, and manage their condition.

Tuberculosis is a major public health concern in Ukraine. It is caused by a bacterium that usually attacks the lungs but can infect any part of the body. Not everyone infected with TB bacteria becomes sick, but each year some 32,000 people in Ukraine develop active TB–with a third of the cases resistant to drugs. More than one in five are also HIV positive, and TB is the leading cause of death among HIV/AIDS patients in Ukraine. With the country’s health system already strained by the COVID-19 pandemic, diagnosis and treatment of TB had declined significantly. Now disruption of health services because of the war could lead to increased transmission and deaths.

The International Rescue Committee and our local partners in Ukraine and Poland are providing assistance to people uprooted from their homes by the war in Ukraine.
Photo: Francesco Pistilli for the IRC

How the IRC helps in Ukraine

We are working with our local partners in Ukraine to support evacuation efforts for women and children and provide psychological care to people displaced by violence. We’re also providing uprooted families with groceries, blankets, warm clothes, cook stoves, cash and other essentials.

With our local partners in Poland we are providing refugees from Ukraine with psychological and legal support, translation services, cash assistance, and essentials including sleeping bags. And we’re also providing medical equipment for health teams operating at border crossing points and refugee reception centers.

Inside the IRC’s health work

The IRC envisions a world where all people, including those affected by crisis, have access to the essential health services they need to survive and thrive. In 2020 alone we provided health programs and services to 31 million people across 32 countries. We also provide water and sanitation services and work to strengthen the capacity and resilience of local health systems.