When millions fled Vietnam, Laos, and Cambodia after the fall of Saigon, the IRC was there to help them start anew in the U.S.

On April 30, 1975, the army of North Vietnam rolled into Saigon, the capital of South Vietnam. The day, celebrated in Vietnam today as Reunification Day, marked the end of a long, bloody, and divisive war—and of the International Rescue Committee’s work in South Vietnam.

The IRC first became involved in this ribbon of land along the South China Sea in 1954, following the defeat of the French colonial forces and partition of the country into North Vietnam and South Vietnam. For the next 21 years, the IRC worked, first, to aid refugees fleeing south from North Vietnam and later, after American entry into the war, to aid displaced South Vietnamese and to offer them health, vocational, and educational services. Now, the North Vietnamese victory forced a massive flight of tens of thousands of Indochinese refugees. 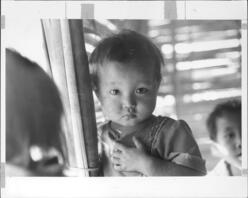 Scores of refugees from Vietnam, Laos, and Cambodia, including this young girl, fled to refugee camps in Thailand.
Photo: IRC

Desperate South Vietnamese climbed the walls of the American embassy in Saigon pleading for help. Over a hundred thousand succeeded in reaching American ships off the coast. From the beginning of the crisis, in the United States and in refugee camps in Thailand, Hong Kong, and Malaysia, the IRC would make one of its longest and deepest commitments to work on behalf of refugees from Indochina.

In the U.S., the IRC took a lead role in the largest refugee resettlement effort the country has ever seen. This led to a dramatic burst of growth in the IRC’s U.S. resettlement programs.The IRC set up processing operations at four U.S. military bases that had become refugee camps in California, Arkansas, Florida and Pennsylvania. Thirty full-time IRC resettlement staff worked in these camps, joined by scores of volunteers.Top priority was given to finding Americans to “sponsor” the refugees, which meant providing short-term housing, and help finding a job and getting acclimated to the local culture.

One of those new IRC staff members was 45-year-old Robert P. DeVecchi, who was assigned to the processing center at Fort Chafee, Arkansas. The experience proved so powerful that DeVecchi never left the IRC, going on to lead us from 1985 to 1997, when he became president emeritus. A number of other current and retired IRC staff members first joined the organization after being moved to help Vietnamese refugees. 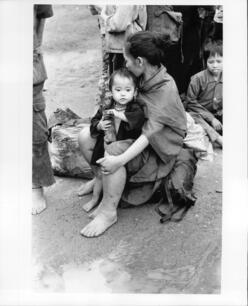 By the end of 1975, the U.S. government had closed its processing centers—but the IRC had by then opened 16 regional resettlement offices around the country. There, IRC caseworkers found housing and jobs for the refugees, provided education and skills training, and helped them integrate into the social, cultural, and economic life of a new environment. This effort became the core of the IRC’s current national refugee resettlement program. During 1975 alone, the IRC helped more than 18,000 refugees, almost all of them Vietnamese, begin new lives in the U.S.

During the 20 years after the fall of Saigon, some two million people poured out of Vietnam, Laos and Cambodia. By 1992, more than a million had been admitted to the U.S. The IRC had helped some 120,000 refugees put down new roots in America.

One of these refugees, Dang Nguyen, told The New York Times in 1976, “I have a steady job, regular raises, a nice place to live, the children work hard, my wife and I are well, we have grandchildren, and next month there will be a big event in our family: We will all get our citizenship papers!”

This story was written by International Rescue Committee president George Rupp in honor of the organization’s 75th anniversary. It was first published on Jun 27, 2008.