Why are children so vulnerable to famine and other hunger crises?

The United Nations recently warned that “famine is at the door” in Somalia, where millions are already nearing starvation. Other countries and regions around the world, including Africa’s Sahel region and Afghanistan, also face crisis-level food insecurity.

One common thread across these contexts and crises is that children will be the most impacted.

What is a hunger crisis?

A hunger crisis happens when families have an unusually high level of malnutrition because they are unable to access the food necessary to meet their nutritional needs. Families may be forced to sell their belongings in order to afford food or they may need to leave their villages, sometimes walking for days in search of food. These journeys are dangerous and may lead to death in cases where extreme hunger and malnutrition begin to affect internal organs.

Children are most at risk of death, whether from starvation or from preventable diseases that turn deadly because of the ways malnutrition weakens their bodies. 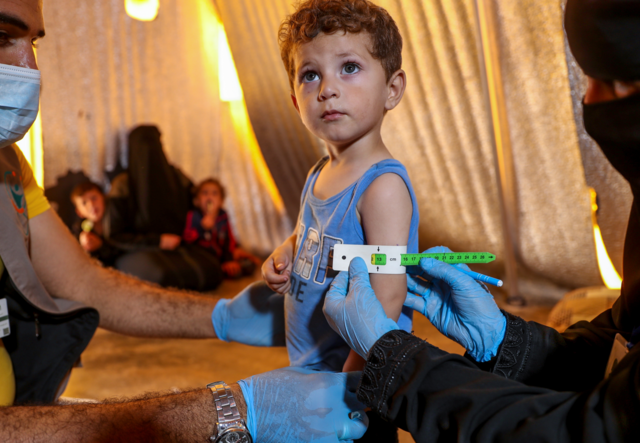 How do hunger crises affect children?

For children, lack of food and nutrients during the developmental stage of life can lead to lifelong setbacks. Around the world today, millions of children are malnourished.

Children in hunger crises experience "wasting", the condition in which a child’s weight and muscle mass are disproportionate to their height as a result of severe malnutrition. Their growth may also be stunted, which in turn damages their physical and cognitive development. A child experiencing wasting or stunting is 11 times more likely to die than a healthy child, with the impacts of these conditions reducing the ability of the child to fight off and recover from usually mild illnesses like diarrhea or measles. 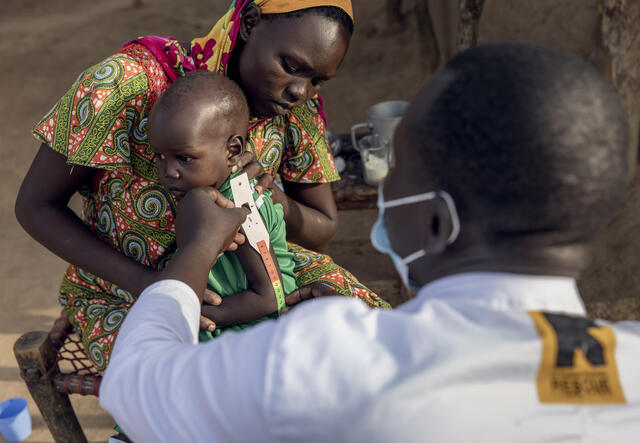 James from the IRC uses MUAC tape to test Peter, 2, for signs of malnutrition. Peter is held by his mother Abang. They fled together after being displaced from their home in South Sudan.
Photo: Adrienne Surprenant for IRC

When children who experienced hunger crises grow up and have children of their own, those children are more likely to be born prematurely or underweight. New mothers suffering or who have suffered from malnutrition may not be able to pass enough nutrients to their children when breastfeeding.

There are also impacts on the baby when the mother is malnourished during pregnancy.

“If a mother is malnourished herself and underweight, when she delivers her baby, this may lead to her child becoming malnourished,” says Dr. Kassim, who has been contributing to the IRC’s malnutrition response in Nigeria since 2016.

Where do children face hunger crises?

Regions experiencing conflict, insect plagues, drought and other climate-related crises tend to be most impacted by food insecurity and hunger. East Africa, Africa’s Sahel region and Afghanistan are all currently grappling with the world’s most severe hunger crises.

In some areas of East Africa, the demand for humanitarian aid is higher than the supply. The result is a large and growing number of children at risk of starvation. Somalia, Ethiopia and Kenya alone report seven million children currently on the verge of starvation. A similar crisis troubles Africa’s Sahel region, where the number of people in need of emergency food assistance has risen from seven million in 2015 to over 30 million in 2022. 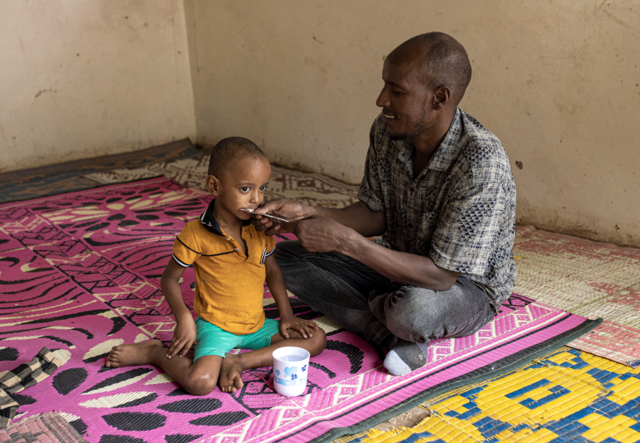 A father feeds his son specially nutritious peanut paste during a malnutrition screening at the Kakuma refugee camp in Turkana, Kenya.
Photo: Patrick Meinhardt for the IRC

Foreign humanitarian funding to Afghanistan has also decreased since the Islamic Emirate of Afghanistan (IEA), commonly known as the Taliban, took control of the country in August 2021. This drop in funding forced the closure of many health clinics in Afghanistan. Economic collapse and an ongoing drought, also intensified by climate change, have put one million children at risk of death as a result of malnutrition.

“The international community has turned its back on us.” Says Awesta*, an emergency support officer for the IRC’s cash distribution program.

“The health care system is on the brink of collapse; most Afghans can’t afford to feed themselves or their families, and, with millions marching towards famine, I am desperately concerned for the people of my country.”

Famines are not natural disasters. They are the consequence of human action and inaction.

Famines are the most severe form of hunger crisis. When a famine is declared, people have already been living on very little food, children are experiencing stunting and wasting and families have been selling all their possessions in order to feed themselves. By the time a famine is declared, it’s too late to save hundreds of thousands of lives.

While weather patterns and climate change can reduce crop yields, there is also often a man-made contribution to the crisis. People may have been forced from their homes and farms, or there may have been and burst of conflict or other societal crisis. 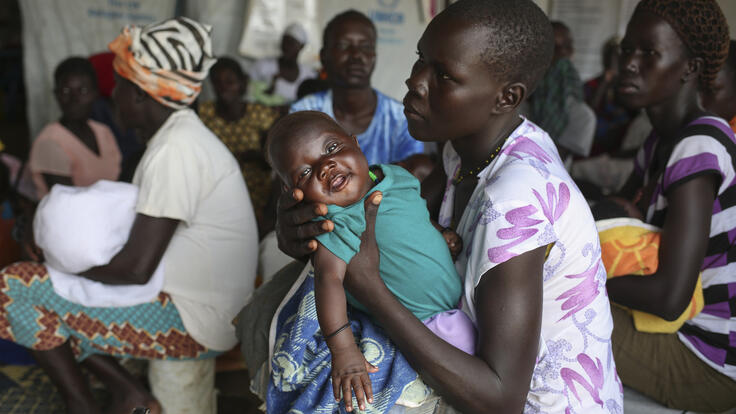 Conflict and drought have greatly reduced food supplies in South Sudan, displacing nearly 2.3 million refugees. These South Sudanese refugees wait to get their children vaccinated at the Koro Health Center in Uganda.
Photo: Tara Todras-Whitehill for the IRC

Conflicts around the world have displaced millions of people, collapsed healthcare systems and disrupted daily life.

“There is nothing natural about famines in the 21st century,” says David Miliband, president and CEO of the IRC. “While a complex set of factors are driving extreme hunger, the slide into famine and mass death is man-made, driven by international inaction.”

Action must be taken immediately to save the lives of millions affected by hunger crises around the world. The IRC is dedicated to preventing famines and works every day to help those affected.

How does the IRC combat child hunger?

The IRC has set up a series of inpatient stabilization centers to provide treatment for mothers and children suffering from severe acute malnutrition in their own communities, making sure that care comes to those in need and not the other way around. For less severe cases, we host a training program where mothers are taught best feeding practices while children receive nutritious food.

The IRC also has mobile health teams that provide healthcare and treat malnutrition in remote areas. In Kenya, Nigeria, Syria, Yemen and other places, IRC mobile health teams reach thousands of malnourished children who otherwise struggle to get help. 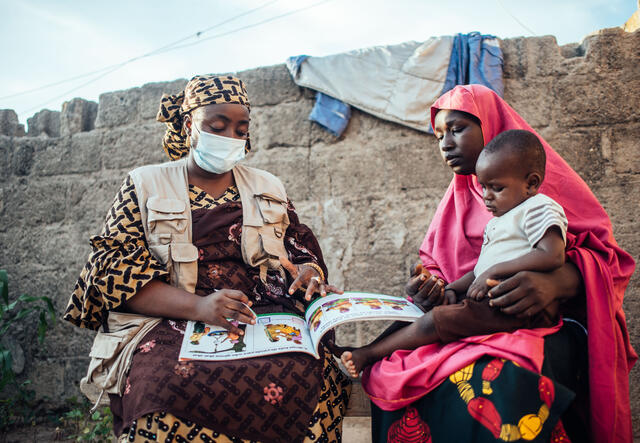 Fatima Wakilamtu, an IRC nutrition officer, teaches Bilkisu Ahmed how to measure her child’s arm using a MUAC tape at her home in Borno, Nigeria.
Photo: KC Nwakalor for the IRC

Cash relief has proven to be an effective tool to provide immediate assistance to vulnerable populations. This program gives families cash or vouchers that can be used to buy essentials, including food. It is a fast, efficient and cost-effective form of aid that also supports local businesses during a crisis. 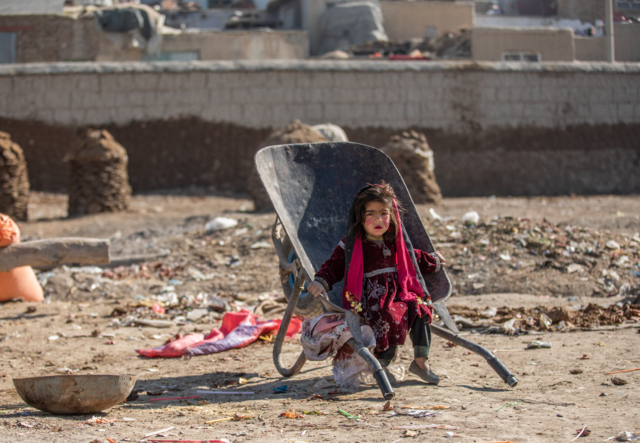 A girl plays in a wheel barrow in Ghaibi Bala camp, Afghanistan where the IRC is assessing the needs of vulnerable families and providing emergency cash distributions.
Photo: Kellie Ryan for the IRC

Access to clean water and sanitation is needed to prevent illness from spreading in areas where hunger crises have weakened people’s immune systems. The IRC restores clean water sources, but we can’t do it alone.

The IRC is calling on world leaders to stand with us in our mission to provide water, case relief and health care to children put at risk by hunger crises. No child deserves to have their lives threatened by a lack of food and its consequences.