The Ebola lessons reader: what’s being said, what’s missing and why it matters 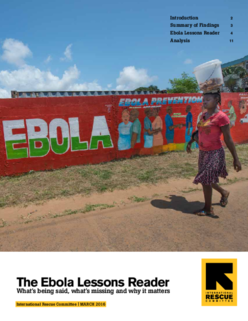 Report: The Ebola lessons reader: what’s being said, what’s missing and why it matters

A comprehensive review of Ebola reports find they offer valuable solutions, but they also perpetuate problems by ignoring fundamental realities.

The weaknesses of the global response to Ebola in West Africa from 2014 to 2016 not only cost tens of thou- sands of lives; it also hurt the credibility and confidence of the global health community. So it was encouraging that universities, think-tanks, the World Health Organiza- tion and other institutions took time to explore what went wrong and how we can all do better.

The resulting reports contain valuable, actionable in- sights. But collectively, their impact falls short of what could have been.

First, the sheer number and diversity of documents threaten to diffuse, rather than intensify, the focus on key issues. Similar recommendations, articulated differently, risk making consensus sound like cacophony.

Secondly, and more seriously, these reports reflect a per- sistent weakness of the global conversation about health systems: the erasing of politics. This includes the politics of poor, post-conflict countries, but also the politics of the UN, NGOs and the international aid world. These failures set the stage for a small Ebola outbreak to evolve into a catastrophic epidemic. The failure to anticipate and adapt to political realities then hobbled the response effort.

The reports—with the notable exception of the working paper by the Overseas Development Institute—per- petuate a simplified narrative of the Ebola epidemic. It focuses disproportionately on the top levels of the World Health Organization, while giving little to no scrutiny to other key issues and a complex ecosystem of players that carried out the bulk of the response.

Thousands of staff of the International Rescue Commit- tee (IRC) participated in the Ebola response in Sierra Leone and Liberia, working with everyone from top decision-makers in WHO to front-line health workers and Ebola patients. We reviewed these reports with these responders in mind, the vast majority of them citizens of the affected countries. We owe it to them, and to the tens of thousands of people directly affected, to highlight the realities of the response that are in danger of being forgotten. We also owe it to the present and future generations that will be faced with the next deadly infectious disease epidemic.