Seven common myths about refugee resettlement in the United States

Contrary to conventional wisdom, refugees welcomed to the United States come from all over the world, represent a diversity of religions, and are invariably hard-working and successful.

Never before has the world witnessed such a dramatic scale of human suffering. Today, 65 million people—24 per minute—are displaced worldwide by conflict and persecution. While resettlement is a lifesaving and lasting solution for those with nowhere else to go, some elected officials in the U.S. — including President Donald Trump — have promoted harmful policies based on misinformation and misconceptions about refugees and how resettlement really works.

Fact: Refugees are fleeing terror groups such as ISIS and Boko Haram. Experts agree that refugees are not a security threat.

Last year, 19 Americans were killed in horrific terrorist attacks in the U.S. None of these atrocities were committed by refugees.

Like the innocent victims of these attacks, refugees are also victims of terror in their countries, living under the constant violence and persecution by militant groups such as ISIS in the Middle East, Boko Haram in Nigeria, and Al-Shabab in Somalia.

Refugees considered for resettlement in the U.S. are subject to the highest level of security checks involving the National Counterterrorism Center, the Federal Bureau of Investigation, the Defense Department, the State Department, and the Department of Homeland Security, among other intelligence, security and law-enforcement agencies.

“These refugees are fleeing the horrors of war,” says David Murphy, executive director of the IRC in San Diego. “They are fleeing terrorists, they are not terrorists themselves.”

Fact: More than half of the world's refugees are children.

Fears that most refugees are young men who support terrorism are unfounded. More than half of the world’s refugees are children under the age of 18, and the United States predominantly admits refugee families. One of these families is the Kawkab family who fled their home in northeast Syria.

Myth: We have never faced a refugee crisis like this before.

Fact: From World War II to Vietnam, the U.S. has provided safe refuge for many refugee families over the years.

Time and time again, the U.S. has shown leadership during world crises. Most recently, some 1.3 million Southeast Asians fleeing conflicts in the mid-twentieth century were resettled in countries around the world, including more than 800,000 in the U.S. Coincidentally, hundreds of thousands of South Vietnamese escaped on rickety, overcrowded, barely seaworthy boats, just as refugees are doing in the Mediterranean and Aegean seas today.

Meet Lieu Thi Dang, one of the 800,000 Vietnamese refugees who were welcomed by the U.S. 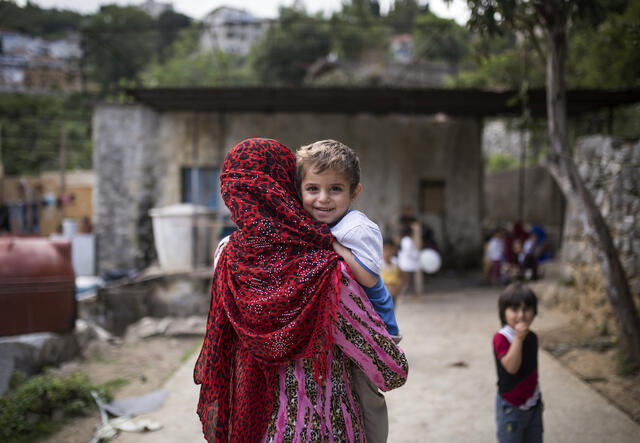 A Syrian mother in Lebanon carries her child. More than half of the world's refugees are women and children.
Photo: Jacob Russell/IRC

Fact: Refugees are forced to flee their homes due to war and persecution.

Refugees leave their country because they have no other choice. They fear for their lives and those of their families when their governments will not or cannot protect them from war, sectarian conflict and serious human-rights abuses.

Often they must leave their homes without notice, must travel with few belongings or none at all, and face perilous journeys involving great hardship. They risk their lives to cross borders, knowing they will be unable to return home until conditions improve, which can take decades.

In 2015, 134,044 refugees submitted applications to the United Nations refugee agency (UNHCR). Of that number, 25 percent were survivors of torture and other types of violence, and another 34 percent were in desperate need of physical or legal protection.

Myth: Refugees are all Muslim.

Fact: Refugees are all religions.

According to the U.S. Office of Admissions Refugee Processing Center, only 24,768 refugees who arrived between January 2016 and August 2016 were Muslim, while more than 30,000 were of Christian and other faiths.

Myth: Refugees are all from the Middle East.

Fact: The majority of refugees considered for resettlement come from Myanmar.

For the past decade, 27 percent of all refugees have been from Myanmar (also known as Burma), where conflict between several ethnic groups and the government continues to rage, making it the world’s longest-running civil war. Bhutan, Iraq, Somalia, Congo and Afghanistan account for a significant portion of the total refugee population.

Meet the Win family, recently resettled in Salt Lake City, Utah. The family was living in the largest camp for Burmese refugees.

Myth: Refugees are a drain on society.

The U.S. has proudly played a leading role in welcoming people in need. Refugees like former Secretary of State Madeleine Albright, Google co-founder Seregy Brin, and Nobel Prize-winning physicist and IRC founder Albert Einstein came to the U.S. to rebuild their lives. In fact, the vast majority of newly resettled refugees quickly find jobs (85 percent of refugees resettled by the IRC are working within 180 days of arrival), they spend money that helps local economies and send their children to school with the intent that they become productive members of their new communities

“We continue to see incredible resilience and determination in refugee families who have lost everything and survived the terror of war,” says David Murphy, executive director of the IRC in San Diego. “…We welcome the world’s most vulnerable in partnership with our local communities, from business and faith leaders to teachers and employers, and together ensure that families like these have the tools they need to rebuild their lives in their new homes.”

Eighteen months after arriving in the U.S., Congolese refugee Charly Ngoma was promoted to general manager at a Chipotle restaurant in Phoenix, Ariz.